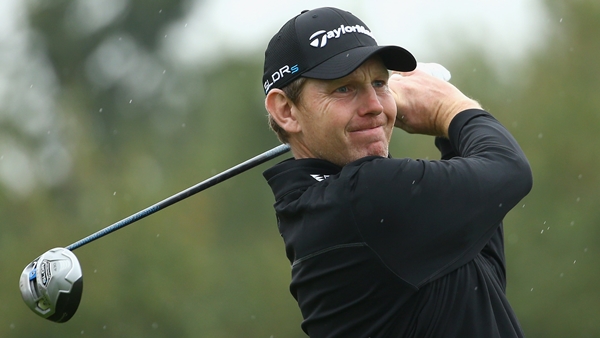 NEWPORT, Wales – Shane Lowry shot a 6-under 65 to take a one-shot lead after the second round of the Wales Open on Friday, while Stephen Gallacher missed the cut in his last tournament before his first Ryder Cup.

Lowry didn’t drop a shot as he moved to 9-under 133, one shot ahead of Joost Luiten (69) and Belgium’s Nicolas Colsaerts, who eagled the 18th hole for the second day in a row in shooting a 68.

Gallacher failed to recover from his opening round of 78 at Celtic Manor, with his 70 leaving him five shots below the cut line.

“I’ve missed the cut but there’s no alarm bells ringing and I am looking forward now to next week,” Gallacher said. “I just felt that I was trying maybe a wee bit too hard yesterday and teeing-up thinking too much about next week, whereas today I was a lot more focused. … I feel good both mentally and physically so there should be no concern come next Friday.”

Fellow Ryder Cup player Lee Westwood nearly missed the cut but birdied two of his closing four holes for a 69 to sit nine shots behind Lowry. Westwood will be making his ninth straight Ryder Cup appearance for Europe, but this is his first tournament since missing the cut at The Barclays last month.

“With the Ryder Cup next week I needed to play all four rounds here, so after not being too competitive yesterday when it was pretty scrappy, I played bit more solid today,” Westwood said. “After taking three weeks off I am not quite match fit and you do lose your sharpness, so that’s the pleasing thing about getting those two birdies.”

Jamie Donaldson, another Ryder Cup rookie, remains well-placed to become the first Welshman to win the Wales Open after a bogey-free 67 put him four shots back. Denmark’s Thomas Bjorn, who is playing in his first Ryder Cup since 2002, added a 69 to move to 2 under.

Jose Maria Olazabal, Europe’s winning captain in 2012, missed the cut after scores of 82 and 76 before also heading north to Scotland as a vice-captain at Gleneagles.