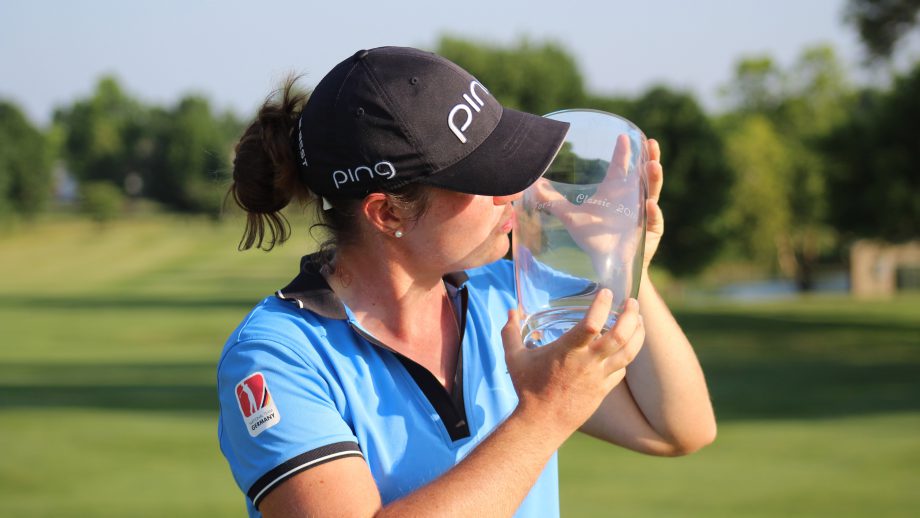 FORSYTH, Ill. — It took 76 holes, but Isi Gabsa (Munich, Germany) did not melt under pressure or in the sweltering central Illinois heat, coming out with her first Symetra Tour win at the 34th annual Forsyth Classic presented by Decatur Park District.

When the final round was complete at Hickory Point Golf Course, Gabsa and Jillian Hollis (Rocky River, Ohio) were tied at 13-under par. They proceeded to play No. 18 in a sudden-death playoff format until a winner was decided. On the fourth playoff hole, Gabsa prevailed thanks to a birdie conversion.

“I’m still not realizing that I won, especially after the four playoff holes,” said Gabsa, who went 2-under par on the afternoon before the playoff. “It’s just speechless. To win in a playoff, it’s always a little bit special. A win is a win at the end. It always feels great.”

For a minute on the third playoff hole, it seemed as if Hollis would put an end to things. Her approach was well inside that of Gabsa, leaving her with the first solid chance at victory.

“I had like a 15-foot putt up the hill. I hit it perfect, I hit it right on my line,” said Hollis, who carded a 4-under par final round to reach the playoff. “It was supposed to break a little left and it just stayed straight.”

The birdie opportunity for Hollis even had Gabsa sweating.

“I was pretty sure she would make it,” Gabsa said. “I already had put my ball back and ready to congratulate her. But, we went back and did it all over again.”

That they did and this time Gabsa did not miss her mark. For Hollis, the runner-up title is nothing to be ashamed of in her first career Symetra Tour start.

“My last hole I had a downhill putt, just hit a little hard through the break,” said Hollis. “Congratulations to her, she played awesome. I proved that I can shoot the scores to win out here. I can shoot my personal best score and follow it up with another good round today. Just to be able to get into a playoff was great. It has been fun this week.”

A two-time winner on the Ladies European Tour (LET) Access Series, this win shows Gabsa exactly why she came to the United States to compete on the road to the LPGA Tour, playing on the Symetra Tour to give herself a chance at the highest level of women’s professional golf.

However, the routine won’t change.

“It will be the same next week, preparing for a tournament the same way,” Gabsa said. “I think the pressure is a little bit off when you win, but you still want to play well the next week and prepare the same way you did this week.”

With the Island Resort Championship in Harris, Mich., up next on the Symetra Tour schedule, a greater than 400 mile trip calls. However, you can bet Gabsa will find some time to celebrate between now and the first round on Friday.

“Our plan is to go to the Hofbräuhaus in Chicago and get some good German food,” said Gabsa, who had her mom on the bag for the win. “Probably have to do that tomorrow afternoon, get some schnitzel, yeah.”