Furyk goes on birdie spree and takes lead at Pebble 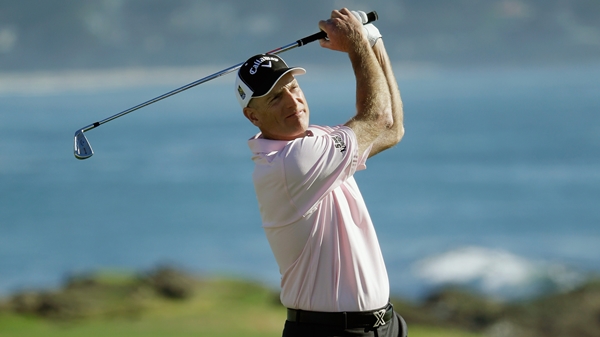 PEBBLE BEACH, Calif. – Jim Furyk hasn’t competed on the PGA Tour in seven months, so he kept his expectations to a minimum at the AT&T Pebble Beach National Pro-Am.

That changed into pressure he knows all too well with one big round.

Furyk made seven birdies over his last 10 holes at Pebble Beach on Saturday, the last one with a wedge he spun back to tap-in range on the par-5 18th, for his best round in two decades playing this tournament. He had a 9-under 63 and a one-shot lead over Matt Jones and Brandt Snedeker going into the final round.

For the 44-year-old Furyk, it’s another chance to end more than four years without a victory. He has had at least a share of the 54-hole lead eight times during that drought without converting. But at least he has another chance.

“Ultimately, I want to win golf tournaments and that’s what’s most important to me,” said Furyk, who was at 18-under 197. “And I think maybe at times last year, I sat here and looked at y’all and said, `I’m not going to put pressure on myself, I’m just going to go out there and try and play the same way.’ It’s not hard to look you right in the eye and say, `I want to win golf tournaments.’ But it’s hard to go out the next day and try to play the same way and not put extra pressure on yourself.

“We all expect a lot of ourselves and we all put pressure on ourselves on Sunday,” he said. “But I think that the way maybe I was doing it in the past was a little counterproductive at times.”

Jones made six birdies in a seven-hole stretch and built a three-shot lead late in the glorious afternoon until he made bogey on his last two holes at Pebble Beach for a 67. Furyk caught up to him and then passed him with a wedge to a foot on the final hole. Brandt Snedeker, who went 47 holes before making his first bogey of the tournament, made a 20-foot birdie putt on his final hole for a 67.

“Didn’t have my best stuff starting out today,” Snedeker said. “I was able to gut out a good round. You kind of have to do that. … You’re going to have a stretch of golf where you’re not playing your best, and hopefully, mine is behind me now.”

Furyk had a stretch of great golf, and it carried him to his best round at Pebble Beach. He made an 8-foot birdie on the ninth hole and took off. He twice had tap-in birdies, and three others were inside 10 feet.

It was better than he imagined considering how long he has been away from competition. His last official tournament was the Tour Championship on Sept. 14 when he tied for second. He also played the Ryder Cup and filled in at the PGA Grand Slam of Golf, but otherwise took one of the longest breaks of his career.

“I really didn’t know where I stood coming out here,” Furyk said. “I was going to be very patient and see where I was, and go play Pebble and L.A. and reassess and have the week off to get ready for Doral and Tampa. I guess I’m pleasantly surprised. I wouldn’t expect to be 18-under par after three days, I’ll promise you that. But also didn’t expect the weather to be like this either.”

The weather has been nothing short of ideal, and it showed in the scoring. The cut was 7-under 209, breaking the tournament record of 4 under in 2005. That was too low for John Daly, who had a 73 at Spyglass Hill and missed the cut for the 11th straight time at this event dating to his rookie season in 1991.

It was the first time Furyk had the lead going into the final round since the Canadian Open nearly seven months ago. “I think it’s only been four events,” Furyk cracked, and he was close. It was six events ago. He also shared the lead at the Barclays, though that was wide open. And in some respects, so is this one.

Brantford, Ont.’s David Hearn dropped 13 spots into a tie for 17th Saturday after a 1-under 71.

Weyburn, Sask. native Graham DeLaet climbed 53 spots up the leaderboard into a tie for 24th thanks to a 7-under 64. Other three players, including Furyk, had better rounds Saturday.