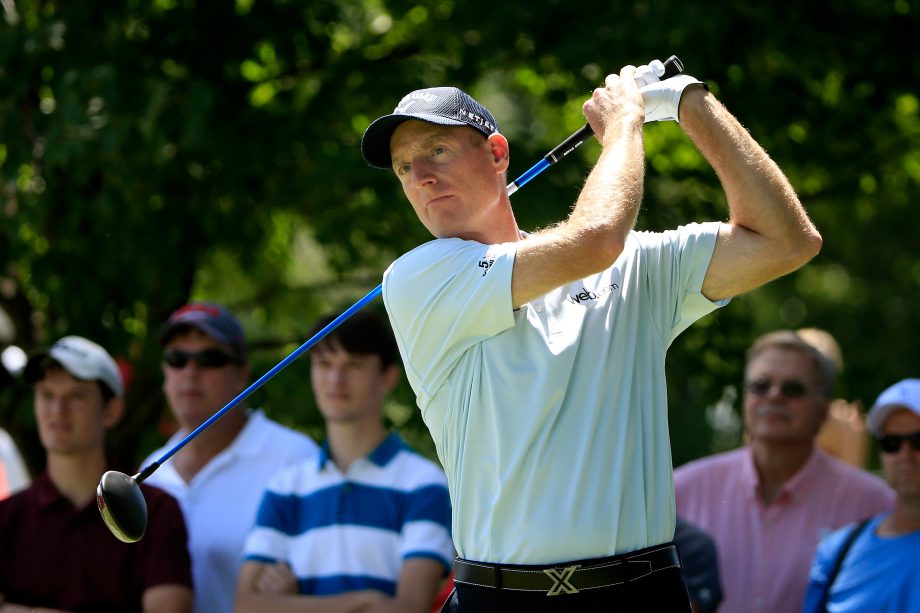 AKRON, Ohio – Jim Furyk is two rounds away from erasing a couple of bad memories at Firestone.

Even with a bogey on his last hole for the second straight day, Furyk did plenty right Friday morning in the Bridgestone Invitational for another 4-under 66 that gave him a four-shot lead midway in the second round.

Furyk ran off three birdies in a four-hole stretch late in his round to reach 8-under 132.

It’s a familiar position for Furyk at Firestone, where he has done everything right except leave with the trophy. In a seven-hole playoff against Tiger Woods in 2001, Furyk missed three putts inside 12 feet for the win, and Woods finally closed him out with a birdie.

More painful was three years ago, when Furyk led wire-to-wire and was in the 18th fairway on Sunday when one bad swing led to a double bogey and he lost by one.

Furyk doesn’t see this as a shot at redemption.

“I would say that I’m disappointed I’ve never won here,” he said. “It’s one of my favorite courses we play. But to have like a chip on my shoulder? No. It’s another year and opportunity, and we’re only halfway. I’m going to try to do the same things this weekend and not really look at the leaderboard that much and go try to shoot under par.”

Shane Lowry of Ireland had a 66 and was at 4-under 136 as the second round was finishing. Of the early starters on a day filled with sun, Furyk was five shots clear of Graeme McDowell (71), Danny Lee (72) and Henrik Stenson (69).

Masters and U.S. Open champion Jordan Spieth got within two shots of the lead when he chipped in for birdie on the third hole (his 12th of the round). He followed with back-to-back bogeys to drop back about the time Furyk was starting to pull away.

The good news for Spieth? In his sixth round at Firestone, he finally broke par with a 68 that left him six shots behind. Spieth would have to win this World Golf Championship to replace Rory McIlroy at No. 1 in the world.

“It goes with the bigger goal of trying to give myself a chance to win this championship,” Spieth said. “It wasn’t going to happen shooting even.”

Even with 17 wins on the PGA Tour, Furyk knows disappointment as well as anyone. During his four-year victory drought he ended this year at Hilton Head, Furyk had seven runner-up finishes that included two majors.

But he recently read a story that mentioned the amount of scars that golfers suffer from losing and how much it affects them.

“Everyone’s got them out here,” he said. “There isn’t anyone that doesn’t have scars and doesn’t have a memory when they step up on a tee where the last two times they hit it left in the water and then you’ve got to step up on the tee and rip one down the middle. So it’s happened to all of us. It’s how you handle those situations that end up making or breaking you and your career.”

Furyk’s win at Hilton Head put him in the conversation for the World Golf Hall of Fame – 17 wins, a major, and 20 years of so much consistency that he has amassed more than $60 million in earnings.

For now, he’ll settle for another Hall of Fame.

Furyk, whose grew up in Pennsylvania and whose parents are from Pittsburgh, struck up a relationship with Jerome Bettis years ago. The Bus has been supporting Furyk’s golf tournament and foundation over the years, and Furyk received an invitation to the NFL Hall of Fame on Saturday night in Canton.

“I’m sure I was one of a thousand people to receive an invite, but I was honored to get one,” Furyk said. “I figured it would be a great, great thing to do to take the kids to see, and they’re up here with me. We’re going to go see the game on Sunday as well. I kind of regret not going to see maybe like Dick LeBeau get in and some of the Steelers while I was here. I watched that one on television, but being so close, it seemed like just something fun to do.

“He supported us and our foundation a bunch, it would be nice to go see him get in.”

Furyk would love to have a trophy with him when he goes to the Hall of Fame exhibition against the Vikings. But there’s still plenty of work to do.