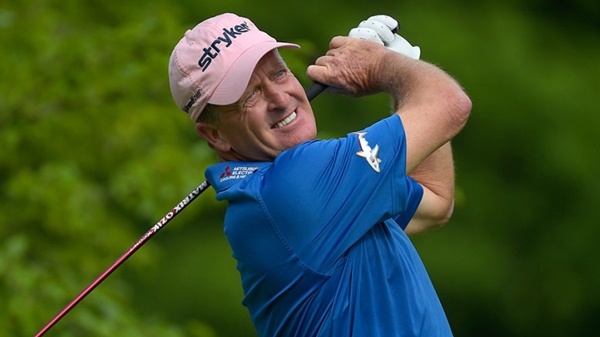 KAPOLEI, Hawaii – Fred Funk shot a 10-under 62 on Saturday for a share of the lead with Paul Goydos in the Champions Tour’s Hawaii Championship.

Funk had 11 birdies and a bogey at Kapolei Golf Club.

“You’ve got to make a lot of birdies out here,” Funk said. “My putter came around. … Never seen greens this good. They’re pretty fast. They’re pristine.”

“Making the putt on No. 1 was key for me,” Goydos said. “A good thing happened!”

“Today, was an exceptional day hitting close,” Funk said. “I’ve been playing well tee to green this year, but the putter has let me down. I switched putters this week.”

The 58-year-old Funk has nine Champions Tour titles, the last in June with partner Jeff Sluman in the Legends of Golf team event.

Corey Pavin and Vijay Singh were 13 under. Pavin birdied the last five holes for a 61, and Singh shot 65.

“I made some putts, finally,” Pavin said. “I’ve been working on working on it. It’s nice to see some putts going in. I hit a really solid firm putt on 18. … I like Hawaii a lot. When I come here it kind of puts me at peace. I feel relaxed here.”

Davis Love III followed his opening 69 with a 72 to drop into a tie for 57th at 3 under in his Champions Tour debut. The 20-time PGA Tour winner turned 50 in April.