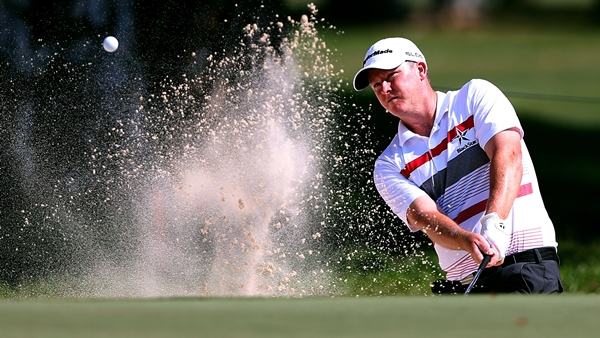 HONG KONG – Marcus Fraser of Australia shot a 5-under 65 Saturday to take a one-shot lead after the third round of the Hong Kong Open, his first tournament after returning from an eight-month injury layoff.

Fraser had four birdies on his last six holes to move to 11-under 199 and sit one shot ahead of fellow Australian Scott Hend.

Fraser has not played since February after needing surgery on his left hand, and said he only started practicing again six weeks ago.

“No one is more surprised than I am,” Fraser said about being the leader. “It hasn’t been the best of eight months but when you go out and play like this, it makes it worth it, that’s for sure.”

Overnight leader Ernie Els struggled to find his touch with the putter as he made a 71, including a double-bogey and three bogeys to fall three shots behind the leader.

Els, who turned 45 on Friday, would have been in real trouble if not for an eagle on the par-five 13th hole which helped salvage his round somewhat.

“It was disappointing, an up-and-down day,” Els said. “But I still feel I’m in with a chance.”

Hend shot a 67 to sit one stroke ahead of a trio of players – South Africa’s Jbe Kruger, Angelo Que of the Philippines and England’s Mark Foster.

“That five-in-a-row was amazing and I just tried to keep the mentality going. I never thought for one moment that I was going to make so many,” Foster said.