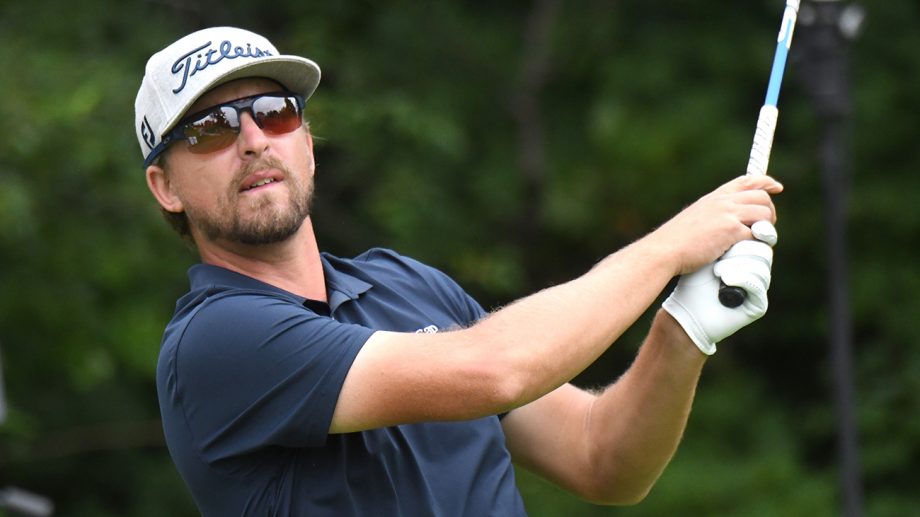 SILVIS, IL - JULY 08: Roger Sloan hits his tee shot on the #2 hole during the first round of the John Deere Classic on July 08, 2021, at TPC Deere Run, Silvis, IL. (Photo by Keith Gillett/Icon Sportswire via Getty Images),
Associated Press

BLAINE, Minn. (AP) – Rickie Fowler’s improved driving helped him shoot a 5-under 65 on Sunday in the final round of the British Open.

Looking for a late push in the FedEx Cup standings, Fowler carried over the strong play Thursday with a 7-under 64 in the first round of the 3M Open.

Fowler set the opening-round pace with a bogey-free round later equaled by Jhonatton Vegas and Troy Merritt, who attended Spring Lake Park High School, about six miles south of the TPC Twin Cities.

Fowler, who has never missed the FedEx Cup playoffs in 11 seasons, started the tournament ranked 124th in the standings, with the top 125 making the playoffs. There are two weeks remaining after the 3M Open to qualify for the playoffs.

“I know where I’m at, what we need to do and stuff like that,” Fowler said. “Really just focusing on things we’ve been working on, playing more consistent good golf. More days like today and things will be fine. Kind of keep things, like I said, simple and small, focus on the day-to-day and this week, and go from there. Everything will work out.”

Vegas capped an eventful opening round in the dark when his approach on the par-5 18th landed on top of a hospitality tent. His ball was eventually found and he was given free relief. He birdied the hole to tie for the lead.

Scott Stallings was trying to equal the course record of 62 before he double-bogeyed the 18th following more than a two-hour delay due to lightning in the area. Stallings was a stroke back at 65 with Adam Schenk and Canadian Roger Sloan. Sloan, from Merritt, B.C., had two holes to play when play was suspended due to darkness with 11 players still on the course.

After his disappointing finish last weekend in the British Open, Louis Oosthuizen shot 68. Dustin Johnson, who withdrew with a back injury after an opening 78 in the 3M Open last year, opened with a 70.

Johnson was playing with Keith Sbarbaro, TaylorMade’s vice president of tour operations, as his caddie after Johnson’s brother, Austin, his usual caddie, tested positive for COVID-19.

Johnson said his brother has already been cleared for his next tournament, the FedEx St. Jude Invitational in Memphis, Tennessee, from Aug. 5-8.

Fowler, who’s looking for his first win since the 2019 Phoenix Open, didn’t have any mistakes. Starting on the back nine, the 32-year-old from California made three straight birdies on his turn from the 18th to the second hole.

He gained some confidence following his final round last weekend at Royal St. George’s. Fowler was one of 30 players to take a charter straight to Minnesota from the British Open.

“That was something that was kind of holding me back from making birdies, moving forward last week,” Fowler said about his driving. “So today, I mean, going off of what we did Sunday last week, just needed to tighten a few things up. This golf course is fairly generous off the tee. There’s a few lakes, ponds that you just need to avoid. Other than that, it’s go, attack for the most part.”

Fowler and Merritt were in the morning wave that started in hazy and humid conditions and then had to wait through a delay of 2 hours, 24 minutes. Stallings was alone in the lead when play resumed, but his second shot on the 18th found the water, and his follow-up overshot the green.

Merritt, who’s missed the cut in his last two starts, could be the sentimental favorite back in Minnesota. He finished with eight birdies, including his final two holes to equal Fowler.

“I’ve seen this golf course now for about 20 years,” Merritt said. “Came to watch the seniors play when I was in high school and got to play it once or twice. It’s just a lot of fun. It’s great for the players, it’s great for the fans, you can make a lot of birdies, the scoring’s usually really low. So, if you like shootouts, this is the golf course for you and you’re going to get another one this week.”