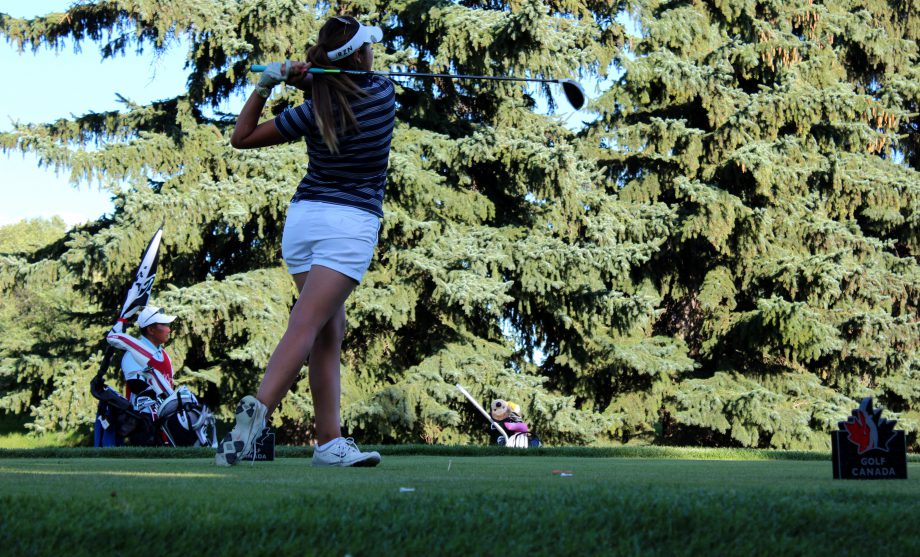 Low scores on moving day have left four players tied atop the leaderboard of the 2015 Canadian Women’s Amateur Championship at Riverside Country Club in Saskatoon, Sask.

Following a postponed first round, the third day of competition began with the conclusion of the second round. The subsequent third round of play finished with Eun-Jeong Seong, Lucia Gutierrez, Bethany Wu and Mariel Galdiano deadlocked for first at 2-under.

Seong climbed the leaderboard by 15 spots after carding a competitive course record of 6-under 66. Playing in her second round of the day, the 15-year-old strung together five birdies over her last seven holes to finish the back nine at 5-under par 30. Seong opened the tournament with rounds of 76 and even-par 72. The product of Korea ranks No. 18 on the World Amateur Golf rankings after capturing the 2015 U.S. Girls’ Junior Championship in Tulsa, Okla.

Lucia Gutierrez played two strong rounds Thursday to move into contention. In her first round of the day, the Peruvian shot a bogey-free 4-under and followed with a third-round 71 to earn a share of the lead.

“I had a pretty simple plan, hit fairways, greens, and it doesn’t matter where on the green you are. I tell myself wherever you are, you can make a two-putt. I’m hitting the ball very well, so I’m very confident whenever I stand over the ball,” said the 19-year-old.

Gutierrez credits her Pan American Games experience – a tie for seventh – with her recent play and boost in confidence. “It really prepared me for this especially, and for all the tournaments I have coming up. It definitely got me in the groove of playing very competitive golf. It was great practice. I got to play against some of the best in the entire continent,” Gutierrez explained.

The No. 5-ranked Bethany Wu of Diamond Bar, Calif., added rounds of 72 and 69 on Thursday to advance two spots. Wu’s third round 3-under performance consisted of five birdies, highlighted by a pair across holes 11 and 12.

Pearl City, Haiwaii native Mariel Galdiano, 17, led the field after round one and is now back on top after carding a third-round 70. The No. 29-ranked player in the world rebounded from an early morning second-round 75 with a 2-under par performance on Thursday afternoon that included three birdies.

Not far behind the quartet are Cindy Ha (Demarest, N.J.), Lauren Greenlief (Reston, Va.) and Lakareber Abe (Angleton, Texas) who sit tied for fifth at even par.

Leading the way for the Canadian contingent is Team Canada National Amateur Squad member Jennifer Ha of Calgary owns a share of twelfth at 3-over par for the tournament. Teammate Maddie Szeryk is T15 at 4-over following a third-round 70.

Team Alberta emerged as the Inter-Provincial Women’s Champions. Counting towards the competition on the day were the team’s two best second-round scores– Jennifer Ha’s 1-under 71 and Team Canada Development Squad member Jaclyn Lee’s 1-over 73. The final member of the team, Sabrine Garrison, notched a 78. The trio of Calgarians finished 8-over 296 to capture the two-round competition.

Seventy-one players who shot 15-over par or better through the opening two rounds advanced to the third round of play. Round four tees off Friday at 7:30 a.m. CST. Tee times and full results are available here.