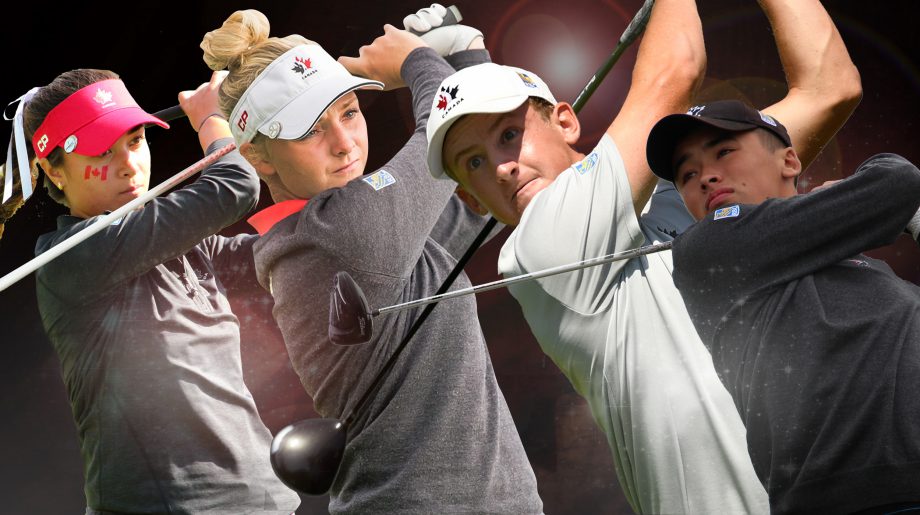 Team Canada athletes Maddie Szeryk and Jared du Toit finished first in the women’s and men’s National Order of Merits, respectively, to claim honours as the top amateur athlete in each division and be named Canada’s 2016 Players of the Year. On the Junior Order of Merits, two-time Development Squad athlete A.J. Ewart captured the boys’ title, while Development Squad rookie Mary Parsons took home the honours for the girls.

“We’re pleased to recognize the outstanding accomplishments that these athletes have worked so hard to achieve through this past season,” said Jeff Thompson, Golf Canada’s Chief Sport Officer. “The respective Order of Merits are powerful tools that we utilize for tracking player performance in identified tournaments throughout the year, and certainly serve to reflect the talent pool that exists in the country for a number of parties—including athletes, coaches, parents, schools, provincial golf associations and the national governing body.”

Ontario public player and Texas resident Maddie Szeryk won the women’s Order of Merit for a second straight season with 4,088.50 points through 12 events. A Texas A&M junior, Szeryk’s season was highlighted by a win at the Florida State Match-Up, and a Top-15 finish at the Canadian Women’s Amateur. Her efforts also earned her the honours of Canada’s top-ranked athlete on the World Amateur Golf Rankings (WAGR)—currently No. 32. She was part of the Canadian trio that finished ninth at the World Amateur Team Championship in Mexico. Szeryk, 20, was also named to the First Team All-SEC for her 2015-16 campaign. She enters her third year with Team Canada’s Amateur Squad program.

Trailing Szeryk in second and third place were fellow teammates Naomi Ko and Josée Doyon. Ko, a Victoria, B.C., native, captured the Canadian Junior Girls Championship, finished fifth at the Women’s Porter Cup and shared seventh at both the Women’s Porter Cup and Canadian Women’s Amateur. She posted a memorable performance at the World Amateur, finishing inside the Top-10 with a share of sixth. Doyon, a St-Georges-de-Beauce, Que., native, had a season underlined by victories at Quebec Women’s Amateur (her second title) and the Women’s Porter Cup. Doyon also teed it up alongside Ko and Szeryk at the World Amateur.

After finishing runner-up in 2015, du Toit had a banner year highlighted by a captivating performance at the RBC Canadian Open in July, where he played in Sunday’s final group and finished with a share of ninth. The Kimberley, B.C., product added a win at the Glencoe Invitational alongside Top-5 finishes at the Monroe and Porter Cup. Now a senior at Arizona State, du Toit also earned an honorable mention to the Division I All-American team and won the Pacific Northwest Golf Association (PNGA) Player of the Year award. In total, he collected 4,637.92 points through 12 events for nearly an 800 point margin over then Amateur Squad teammate Blair Hamilton (now turned pro).

Hamilton, a Burlington, Ont., native, finished runner-up at the Jones Cup while adding Top-20 performances at the Porter Cup and Monroe Invitational. Not far behind Hamilton was Amateur Squad teammate and reigning Canadian Men’s Amateur Champion, Hugo Bernard. The Mont-St-Hilaire, Que., product was medallist at the NCAA Division II championship in addition to posting six Top-5 NCAA results in just eight events. His efforts earned him the Phil Mickelson award, given to the most outstanding freshman in Division II golf. Bernard will return to the Amateur Squad in 2017 for a second consecutive season.

Ewart—who enters his second campaign with the Development Squad—won the boys division with 4,204.17 points over 12 events. The Coquitlam product garnered runner-up honours at both the B.C. Men’s Amateur and Junior championships, alongside a Top-15 result at the Canadian Junior Boys.

Behind Ewart were a pair of newly minted Team Canada rookies for the 2016-17 campaign—Peyton Callens of Langton, Ont., and Chandler McDowell of Springbrook, Alta. Callens managed to record over 4,000 points (4,190) in just eight events, thanks in large part to wins at Future Links Prairie and Ontario Junior Boys championships. McDowell earned the bulk of his total points (3,759.17) at the Alberta Junior Championships, where he finished tied for second in addition to taking home the juvenile title.

On the girls’ side, Delta native Mary Parsons was crowned the winner with 5,830 points through 12 events. The 17-year-old’s season was highlighted by wins at Future Links Pacific and B.C. Junior Girls Championships. This upcoming season marks her first with the Team Canada program; she’s also committed to attend Indiana University.

Third place honours went to Ottawa product Grace St-Germain, who recently entered her freshman season with the Daytona State Falcons. The 18-year-old won the Ontario Women’s Amateur and tallied Top-5 finishes at the Future Links Pacific and Ontario championships as well as the Quebec Women’s Amateur.

The National Men’s and Women’s Orders of Merit recognize and celebrate the season-long achievements of Canada’s amateur golfing talents. The Future Links Junior Boys and Junior Girls Orders of Merit were established to acknowledge and identify Canada’s top junior golfers.

Please be advised that the National Orders of Merit have been going through a thorough review process the last 10 months by an appointed committee of Golf Canada and provincial golf association staff.  Potential changes have been identified and tested during the 2016 golf season in an internal “beta test” environment.

If approved, these recommended changes may be launched as early as February 2017 and will be retroactive to September 1, 2016.  These changes are being recommended to update, enhance and improve the quality and accuracy of the National Order of Merit ranking system.