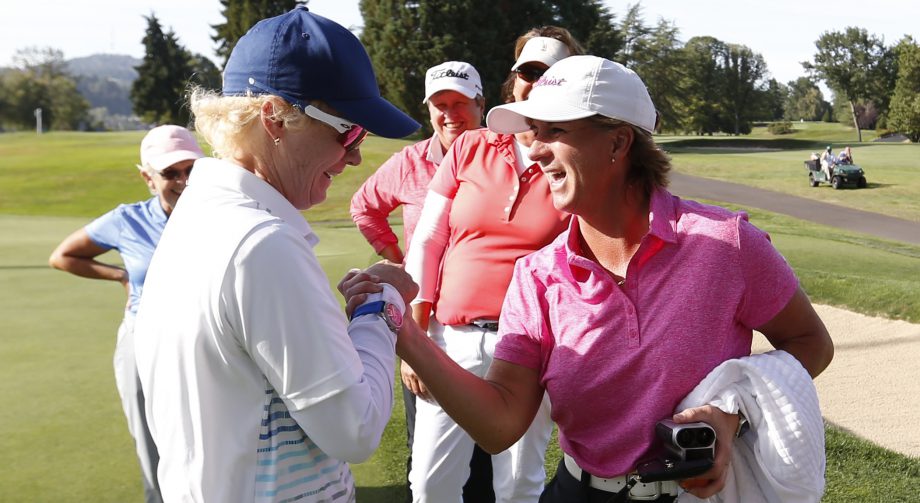 HOUSTON, Texas – Four Canadians are among the 64 competitors to advance to Monday’s first round of match play in the 2017 U.S. Women’s Mid-Amateur Championship on Cypress Creek Course at Champions Golf Club.

The reigning U.S. Women’s Senior champion Judith Kyrinis of Thornhill, Ont., along with friend and runner-up Terrill Samuel of Etobicoke, Ont., lead the Canadian contingent as seed Nos. 21 and 23, respectively. They are joined by Unionville, Ont., product Julia Hodgson and Patti Hogeboom of Kingston, Ont.

Kyrinis and Hogeboom drew each other in Monday’s opening match, beginning at 10:15 a.m. local time.

Lauren Greenlief shot a 4-under-par 68 on Sunday to share medallist honours with Katie Miller and Marissa Mar in the 2017 U.S. Women’s Mid-Amateur Championship on the par-72, 6,022-yard Cypress Creek Course at Champions Golf Club. All three players posted 36-hole scores of 2-under 142.

It is the third time in U.S. Women’s Mid-Amateur history that three or more players were co-medalists. In 2009, four-time champion Meghan Stasi was among four players who ended up tied following two rounds of stroke play. Ellen Port, who has also won four Women’s Mid-Amateurs, and two other players shared medalist in 2002.

Greenlief, who won the 2015 U.S. Women’s Mid-Amateur, matched the lowest 18-hole score in championship history. Dawn Woodard shot a 68 in the first round at Shadow Hawk Golf Club in Richmond, Texas, in 2005. Greenlief, who is competing in her 15th USGA championship, also eclipsed the competitive course record that was equaled yesterday when the first-round leaders each fired a 69.

“The game plan today was to be aggressive,” said Greenlief, whose bogey-free round included three of her four birdies on the inward nine. “Fire at pins and see if I could make some putts.”

Greenlief, 27, of Ashburn, Va., jump-started her record round with the putter by draining a 35-footer for birdie on No. 7. She later punched a 6-iron approach from the trees that ran up onto the green on the par-4 10th to within 20 feet to set up another birdie. Greenlief, the youngest winner in Women’s Mid-Amateur history, added birdie putts of 10 and 15 feet, respectively, on holes 14 and 16.

“I always want to play well and get a better seed,” said Greenlief, who offered that she is more clearly focused this year than when she was defending her title. “It makes match play a little easier, at least in the earlier rounds.”

The USGA relocated the championship from Quail Creek Country Club in Naples, Fla., to Champions Golf Club due to extensive flood damage from Hurricane Irma. The Women’s Mid-Amateur was originally scheduled to be played Oct. 7-12.

The U.S. Women’s Mid-Amateur Championship consists of 36 holes of stroke play followed by six rounds of match play, with the championship scheduled to conclude with an 18-hole final on Thursday, Nov. 16, starting at 9 a.m. CST.

Miller, 32, of Jeannette, Pa., and Mar, 25, of San Francisco, Calif., took different paths in earning medalist honors. Miller, who shared the first-round lead with Shannon Johnson, rallied on her second nine for a 1-over 73. She made a 25-foot birdie putt on the par-3 fourth and stuck a gap wedge to within 3 feet on the par-4 sixth.

Mar, who was a member of the Stanford University team from 2010-14 and opened with a 72, birdied both par 5s on the inward nine. She delivered a 4-hybrid to within 20 feet to set up an eagle attempt on No. 11 before holing a 10-foot putt at No. 13. After making bogey on the following hole, she regrouped with a birdie by hitting an 8-iron approach to within 15 feet on 15.

“It’s been a few years since college golf,” said Mar, who works in corporate development for a financial services company. “I have a whole new perspective on life. The expectations are way lower. I go to a 9-to-5 job every day. Getting to be out here is really fun.”

Eight players tied for 58th place at 16-over 160, resulting in a playoff for the final five match-play berths. The playoff will start on Monday at 7 a.m. on Cypress Creek’s 10th hole. The Round-of-64 matches begin at 8 a.m.

The U.S. Women’s Mid-Amateur is one of 13 national championships conducted annually by the United States Golf Association, 10 of which are strictly for amateurs. Live scoring and updates are available throughout the championship on usga.org.