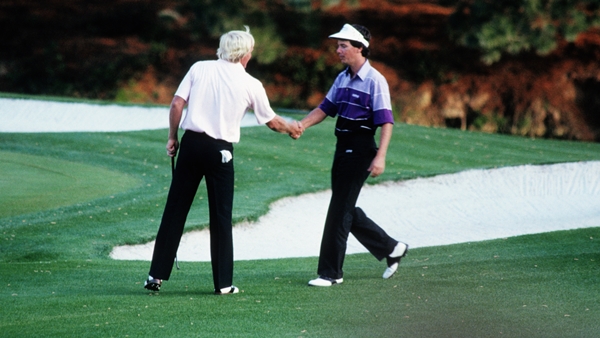 AUGUSTA, Ga. – With rare exception, no other major championship inflicts as much emotional pain as Augusta National. The perks of winning include a lifetime exemption to the Masters and a spot in the most exclusive locker room in golf.

The scars of finishing second linger because players return to the same course year after year.

Think back 10 years ago.

Everyone remembers Phil Mickelson’s birdie curling into the cup, and Lefty leaping with legs splayed to celebrate his first major.

Equally compelling was the image of Ernie Els on the putting green preparing for a playoff. He turned toward the 18th green when he heard the gallery erupt in cheers for the winning birdie, and then the Big Easy hung his head, scooped up his golf balls and walked quietly away.

Tom Weiskopf was runner-up four times, the most of anyone who never wore a green jacket, including 1975 when Jack Nicklaus holed that 45-foot birdie putt on the 16th.

Years later while working as a TV analyst, Weiskopf was asked what Nicklaus was thinking. “If I knew what he was thinking, I would have won this championship,” he said.

Here are the five most heartbreaking losses at the Masters:

5. KEN VENTURI: Venturi isn’t the only 54-hole leader at the Masters to shoot 80 in the final round, which he did in 1956 in what remains the closest an amateur ever came to winning a green jacket. He three-putted six times to finish one shot behind Jack Burke Jr., who rallied from a record eight shots behind to win. Venturi later said if he had won, he would have stayed an amateur forever.

He was a pro in 1958, the leading money winner on tour and one of the favorites. Venturi finished two shots behind Arnold Palmer in the Masters known for Palmer playing two balls behind the 12th green while successfully appealing a ruling. And then in 1960, Venturi was in the clubhouse at 5-under 283. Palmer birdied the last two holes to beat him by one shot. Venturi, who died last year, had to settle for a lone U.S. Open title.

4. SCOTT HOCH: Hoch was never a regular contender at the Masters, though his one close call ranks among the most famous missed putts in Augusta National history.

Often overlooked is a short par putt Hoch missed on the 17th hole in regulation in 1989. He made par on the final hole for a 69 and headed for a sudden-death playoff with Nick Faldo. The playoff began on the 10th hole, with an advantage immediately to Hoch when Faldo struggled to make a bogey.

Hoch had two putts for a green jacket. He rolled his birdie putt by the cup – some references say 2 feet, others 3 feet, but it was just over tap-in range. Hoch studied it from both sides, backed off – and then missed it, flipping his putter in the air. Faldo won with a birdie on the next hole.

3. ED SNEED: Sneed had three PGA Tour wins and had never finished better than 18th in the 13 majors he played. But he looked like a world-beater at Augusta National in 1979 when he took a five-shot lead into the final round.

Sneed still led by three shots with three holes to play when one of the greatest collapses at the Masters unfolded. He closed with three bogeys for a 76 to slip into a sudden-death playoff – the first at the Masters – with Tom Watson and Masters rookie Fuzzy Zoeller. They all made par on No. 10, and Zoeller won with a birdie on the 11th.

“Ed Sneed needs one par in three holes to win the Masters, and we never heard from him again,” Gary Player said recently.

2. ROBERTO DE VICENZO: One year after the Argentine captured the British Open, De Vicenzo was on the cusp of winning the 1968 Masters until he made a bogey on the 18th hole to fall into a tie with Bob Goalby.

The bogey turned out to be the least of his problems. He still closed with a 65, only that’s not what was on the scorecard kept by Tommy Aaron. The birdie 3 that De Vicenzo made on the 17th to take the lead had been entered as a 4, and De Vicenzo signed his card. Under the Rules of Golf, if a score on the card is lower than what a player made, the penalty is disqualification. If the score is higher, it stands. The 65 became a 66. Instead of a playoff, he was a runner-up.

That led to one of the most famous lines in golf from De Vicenzo: “What a stupid I am.”

1. GREG NORMAN: No other player symbolizes heartbreak at Augusta National than the Shark.

His best opportunity was in 1996, when Norman set a major championship record by blowing a six-shot lead in the final round to Nick Faldo. Ten years earlier, Norman ran off four straight birdies late in the round to tie Jack Nicklaus, only to hit 4-iron from the 18th fairway into the gallery to make bogey.

At the previous major, the 1986 PGA Championship, Norman lost on the final hole when Bob Tway holed out from a bunker. At the Masters, he had the upper hand on the second hole of a playoff against Larry Mize, who had missed the green at No. 11 well to the right. Mize chipped across the 11th green, and it was picking up speed when it rammed into the pin and dropped for birdie.