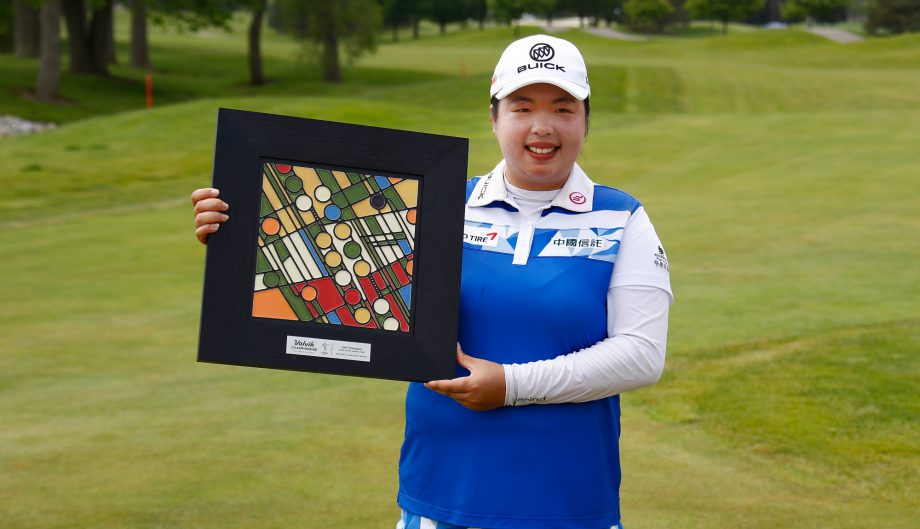 Shanshan Feng won in Malaysia and Japan during an impressive stretch toward the end of the 2016 season.

On American soil, however, it had been a while since her last victory.

That dry spell ended when Feng shot a 4-under 68 on Sunday to win the LPGA Volvik Championship by one stroke over Minjee Lee and Sung Hyun Park. It was her first victory of the season and seventh of her career – and her first in the U.S. since the CME Group Titleholders in 2013.

She led by one shot after a bogey-free third round Saturday, then kept the competition at bay on the 6,734-yard course at Travis Pointe Country Club.

Feng, a bronze medallist for China at the 2016 Olympics, led by four strokes with four holes to play, but she made a bogey on No. 16 and Lee birdied 17. Needing a bogey on the 18th to win, Feng easily tapped in for one and finished at 19-under 269.

"I had a really fun day out there. I started off really hot." @minjeegolf finishes T2 after a great final round at the @VolvikLPGA pic.twitter.com/7NcKozUBL0

Playing a couple groups ahead of Feng, Lee knew she needed a strong finish to catch the leader, and after her birdie on No. 17, she tried to reach the green on the par-5 18th in two. Lee missed well to the left and ended up near the scoring tent before scrambling to make par.

“I was like, ‘Oh, I’m four shots behind with like two holes to go.’ So just tried to play and make as many birdies as I could on the last two holes,” Lee said. “I made one.”

But Feng still had room for error as she was finishing her round – not that she necessarily realized it. Feng says she tries to ignore the leaderboard when she plays.

“I had no idea about the others other than my playing partners, so I was maybe assuming somebody in front of me maybe would have a super-low round and maybe would catch me,” Feng said. “So I had no idea. I was just focusing on my own game and own plan.”

Feng’s second shot on 18 left her behind a bunker near the green, and her shot from there still came up short of the putting surface. When she did reach the green, she still had two putts for the win from a pretty short distance.

Lydia Ko skipped this event but remains No. 1 in the Rolex Rankings. So Yeon Ryu and Ariya Jutanugarn each could have displaced her this week, but Ryu (72) finished tied for 56th at 3 under, and Jutanugarn (71) – the defending champion at this event – was 11 under and tied for 21st. Ryu had finished in the top 10 in 11 consecutive events, dating to last season.

“I got the bronze medal in Rio and that really gave me a lot more confidence,” she said. “After that I just reminded myself every time, ‘Hey, just smile all the time, it doesn’t matter if you hit a bad shot. I mean it’s going to happen because we’re human beings and we should allow ourselves to do that, and that’s what I’ve been doing well.”

"I think overall I've been a consistent player but I want to win more." @shanshanfengCHN watch press conference at #VolvikLPGA: pic.twitter.com/sfRHYufVDY

Feng’s most recent LPGA win before Sunday was at last year’s TOTO Japan Classic , and the ending was similar. She took a three-shot lead to the final hole, then made a double bogey that was enough for a one-stroke victory.

She came into the final round Sunday with a one-stroke lead over Salas and was ahead by two after the front nine. Birdies on Nos. 13 and 14 put Feng ahead by four.