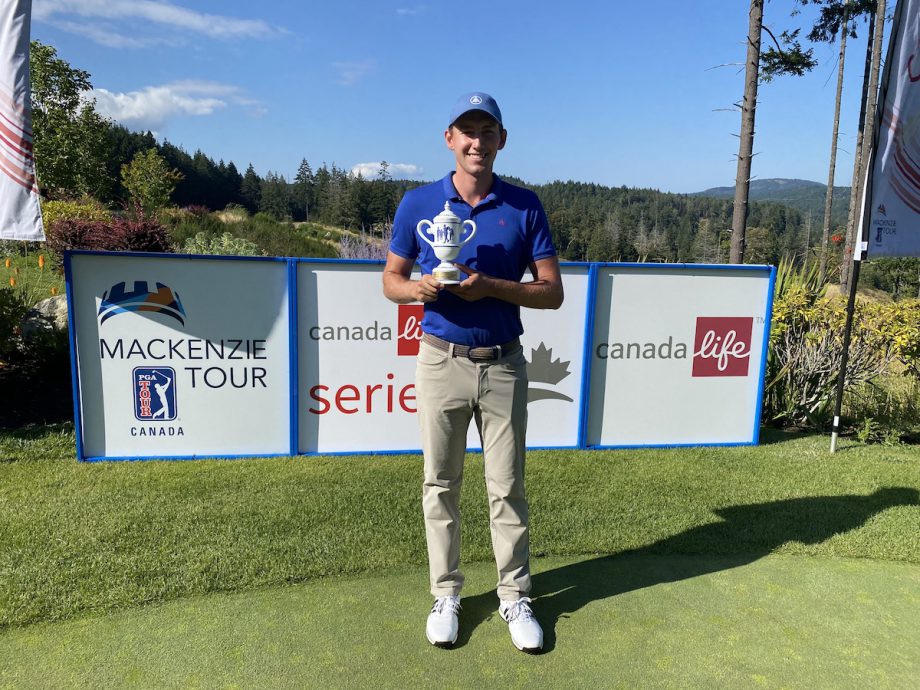 LANGFORD, B.C.—The good thing about shooting a 63 in the opening round is it gives you a cushion for the rest of the tournament. Evan Holmes can definitely relate.

Despite playing the final 36 holes in only even-par, Holmes rode his 8-under start to victory in the Canada Life Series’ first tournament at Bear Mountain’s Mountain Course. Holmes defeated Zach Anderson by two shots to take the early lead on the Points List with three tournaments remaining. Canadians Raoul Ménard and Derek Gillespie and China’s Yi Cao tied for third, at 4-under.

Since Monday when Holmes made three consecutive birdies to begin this inaugural Canada Life Series event, he has maintained his advantage even as Anderson chipped away each day. Anderson moved from five strokes behind after 18 holes to three shots back when the final round began. Anderson shot a Wednesday 71 but bogeyed three of his final four holes after getting to 9-under with a birdie at No. 13. Following a par at the 14th, Anderson made bogeys at 15, 17 and 18. Holmes also struggled coming in on a difficult scoring day. The former University of British Columbia golfer moved to 10-under through 13 but played his final five holes in 2-over. In the end, he benefited from Anderson’s stumbles and his strong beginning to the tournament paid dividends.

“The highlight of the week is for sure the first-round 63. It was nice to get off to that good start,” Holmes explained. “It feels really good. You probably have to win at least one of them to be No. 1 (at the end of the Series), so I couldn’t have asked for a better start, and I’m looking forward to the other three.”

“Chasing Evan all day was good, and getting off to a good start definitely helped,” said Anderson. “I think everyone in the group was tied at minus-8 through three and then Lawren fell off and me and Evan were battling it out pretty good on the back nine. Then we both stumbled coming in.”

Lawren Rowe, who began the final round a stroke behind Holmes, struggled to a 5-over 76 to fall into sixth place, at 3-under.   Holmes was philosophical about what turned out to be the toughest day of the 54-hole tournament.

“It was long and tiring. The same as [Tuesday], swirling winds all day and a little bit stronger,” Holmes said of the final round. “It was tough to hit a lot of good shots out there, but it was nice to grind it out.  “Conditions were pretty tough,” he continued, noting the dryness of the course because of the wind. “It got a little baked out again and a lot of wind. It was very tough to commit to clubs.