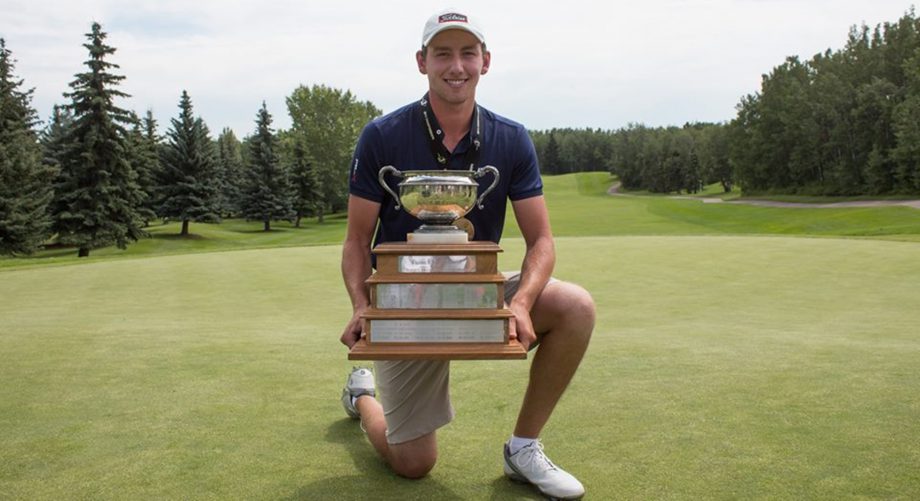 INNISFAIL, Alta. – It was a pressure-packed final round of the 2016 Sun Life Financial Alberta Men’s Amateur Championship. Third round leader, Evan Holmes, battled with Matt Williams all around the golf course on a sun-soaked day at Innisfail Golf Club. Williams, who lead after rounds one and two, put pressure on Holmes by making four birdies on the front nine, making the turn with a score of 32. Holmes finished strong, making birdies on four of the last six holes. That clutch performance on the back nine sealed the deal for Holmes as he eventually won by a margin of three strokes.

It was a popular victory for the Earl Grey Golf Club member, as evidenced by the cheers from fellow competitors and the gallery alike. Holmes commented that, “it’s a big monkey off my back. I’ve been so close for the last few years. I really felt like I was playing well coming into this one so I’m glad that I actually showed it and got it done. It feels really good.” When asked about the strong start from Williams, Holmes said, “I kind of had images of a few years ago. He (Williams) was going low and I had a bad double on ten. But then we both made a lot of birdies coming in. It was a really fun match all day long.”

There was a playoff for the Team Alberta Inter-provincial Squad at the 2016 Canadian Men’s Amateur Championship on August 8-11 at the Royal Ottawa G&CC & Eagle Creek GC. Geoff Fry (Glencoe G&CC), Andrew Harrison (Edmonton Petroleum G&CC), and Scott Secord (Country Hills GC) finished in a tie for third at seven under par. The trio headed back to hole #18 to playoff for the last position. Scott Secord hit a beautiful second shot on the par five, nearly holing it for an albatross. He tapped in for eagle and claimed the last position on the team. Evan Holmes earned a spot on the 2017 Pacific Coast Amateur Team to be played at Chambers Bay in University Place, WA on July 25-28, 2017.