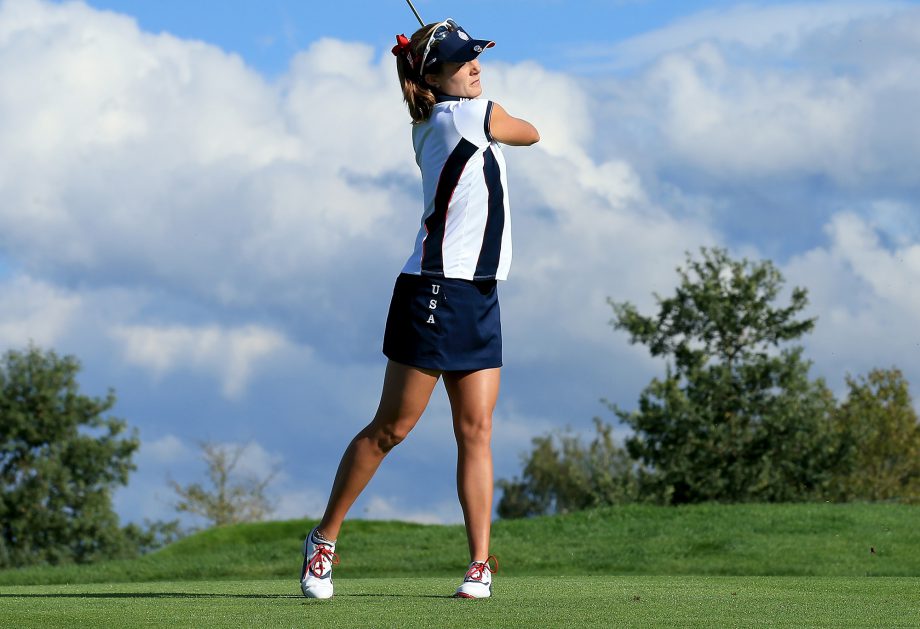 ST. LEON-ROT, Germany – Lexi Thompson and Cristie Kerr earned a point for the United States to trail Europe 8-5 in the Solheim Cup before the other fourball matches were suspended Saturday due to bad light.

The American duo defeated Spanish pair Carlota Ciganda and Azahara Munoz 3 and 2 to reduce the Europeans’ lead after a good morning for the home team.

“We knew where we stood going into the afternoon. It didn’t really change our mindset,” Thompson said. “We knew we made a good team with the matches that we’ve played together. We just went out and played aggressive.”

The U.S. held a slight advantage in the three remaining fourball matches to be resumed Sunday morning at St. Leon-Rot Golf Club.

Rookie Alison Lee and Brittany Lincicome were 1 up after 15 holes against England’s Charley Hull and Norway’s Suzann Pettersen, who missed a birdie to match Lee on the last hole played before darkness intervened.

Stacy Lewis rediscovered her form as she and Gerina Piller were 1 up over Germany’s Caroline Masson and Sweden’s Caroline Hedwall after 16 holes played.

Catriona Matthew of Scotland gave the Europeans reason to cheer when she birdied the 15th hole to leave her and Karine Icher of France 1 up against Brittany Lang and Lizette Salas with three holes to play.

“At least we have a little bit of red on the board. I haven’t seen much of that the last few days,” U.S. captain Juli Inkster said. “But we need to finish. We need to buckle down and get those last two holes.”

Earlier Saturday, Hull and Pettersen recovered from 4 down to win 1 up against Paula Creamer and Morgan Pressel, as Europe took a commanding 8-4 lead from the morning’s foursome matches.

Creamer and Pressel were 4 up and comfortable after the 11th hole of their foursome match, but the European pair birdied the next and finished with four straight birdies to give the home team all the momentum going into the afternoon’s fourball matches.

“I was just buzzing,” Hull said.

The 19-year-old from England swatted away an insect and almost holed an ace on the 15th, where Pettersen started the four-birdie run.

“I told Charley, let’s throw darts at the pins, stay aggressive,” Pettersen said. “This one was a robbery.”

Home favorite Sandra Gal and Matthew then defeated Lincicome and Angela Stanford 1 up to deal the Americans another blow.

Melissa Reid of England played a big part in the early European dominance on her 28th birthday.

Reid rejoined partner Ciganda to storm to a 4 and 3 win over Lee and Michelle Wie in their foursome match, which had also been suspended Friday due to bad light.

In the other carried over fourball, Piller and Lang pulled level with German pair Gal and Caroline Masson, who had been 1 up through 15 holes, to halve another point.

Lewis and Piller provided the U.S. with its only full point from the morning thanks to a 5 and 4 victory over Swedish duo Anna Nordqvist and Hedwall.

The event will end Sunday with 12 singles matches after the suspended fourball matches are played.

Europe needs 14 points to win a third straight Solheim Cup for the first time. The U.S. needs 14 1/2 to extend its series lead to 9-5.