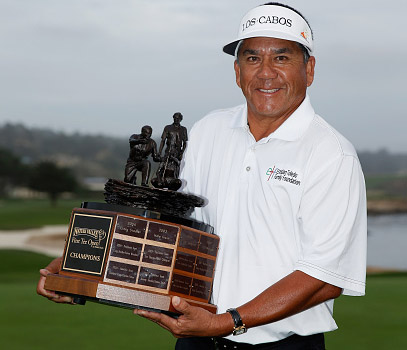 Watson was trying to break Mike Fetchick’s record as the oldest winner in tour history. Fetchick won the 1985 Hilton Head Seniors Invitational on his 63rd birthday.

Watson finished with a 67. The Hall of Famer moved into a tie for the lead at 9 under on the par-4 16th with his seventh birdie of the round, but bogeyed the 17th after hitting his tee shot into a bunker and missing a 10-foot par putt. He parred the 18th.

Second-round leader Colin Montgomerie closed with a 73 to tie for third at 7 under with Vijay Singh and Woody Austin. Singh finished with a 69, and Austin shot 70.

Canadian Rod Spittle finished with a 4-under 68 for a share of 11th place while Stephen Ames closed with an even-par final round to sit T23.