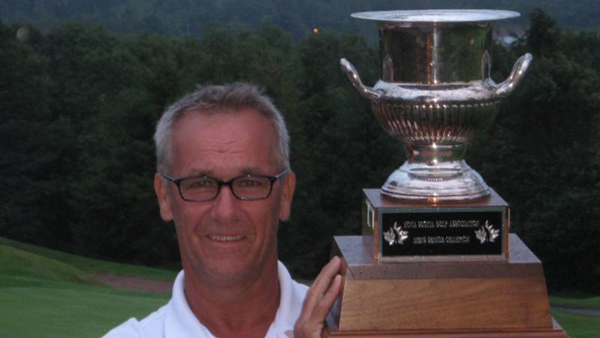 DIGBY, NS – Ernie Sheaves drive home to Cape Breton will be a happy one. The 58 year old was sharp en route to a 2-under par 69 and a four stroke victory at the NSGA (Nova Scotia Golf Association) Senior Men’s Championship today at Digby Pines Golf Resort and Spa.

Sheaves, who entered today’s final round at even par, was locked in a battle with Paragon’s Tom Banks through the first 10 holes. However, Sheaves would turn it on the last seven holes taking the title in convincing fashion.

Sheaves started his day with a bogey on the par 4 #1 before also bogeying the par 4 #4, a birdie brought him back to +1, which equalled Banks’ score through nine holes.

Sheaves carded an impressive stretch of four birdies in five holes to seal the win, which were a result of some great approach shots.

“I have always been a good iron player, it’s been the strength of my game even when I was out west working” said Sheaves, who spent years working in Fort McMurray. “I told myself before yesterday I was just going to focus on taking it shot by shot, when I got on my run I knew how tough that can be for the other guy, and I just had a ton of confidence”.

After Gerry MacMillan and Mike Hebb declined team spots because of prior engagements, a three-way playoff occurred to determine the final team spot. Bill Burns of Lingan, Peter Stirling of Ashburn, and Andy Wilson (Digby) were the competitors and after one hole Burns was victorious after sinking a par amid rainy conditions. After two more holes, Stirling would best Wilson to earn the alternate spot on the provincial team.

To see full results from the 2014 Men’s Senior, click here.