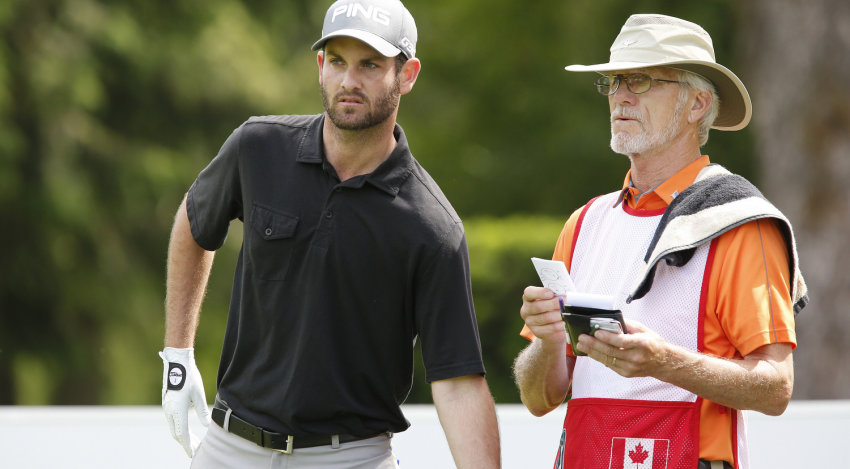 SASKATOON, Sask. – Bear, Delaware’s Eric Onesi shot a 6-under 66 on Friday at Dakota Dunes Golf Links to take the solo lead heading into the weekend at the SIGA Dakota Dunes Open presented by SaskTel, the fourth event of the Mackenzie Tour – PGA TOUR Canada season.

The 27-year old reached 14-under and led by one over Moscow, Pennsylvania’s Nicholas Reach and French Polynesia’s Vaita Guillaume through 36 holes.

“The course was setting up well for me, especially on the par-5s,” said the long-hitting Onesi, who has played the par-5s in 9-under through two rounds in Saskatoon. “There was a left-to-right wind, which is my favourable wind, so I was hitting 7- or 8-iron into them and taking advantage of those and making some easy birdies.”

The Old Dominion University graduate, who earned medalist honours at the British Columbia Qualifying Tournament earlier this season, is making a return as a touring professional this year after taking time away from the game over the past two seasons. Onesi earned Web.com Tour status in 2012, but said the expectations to succeed as a young professional got the better of him, and he worked as a caddie at Bay Hill Club and Lodge for parts of the last two years.

“I just put too much pressure on myself back then,” said Onesi of his season on the Web.com Tour in 2012, when he made just three cuts in seven starts and finished 210th on the Money List. “I had a lot of success right out of college, and when I had Web.com Tour status I kind of thought I should have it every year. When you have early success I think you expect to have it all the time. I hit a little wall and I think I took it hard and the desire went down, but I’m still young in this game and I know I can play out there, so I keep telling myself ‘I belong.’”

Onesi, who has made two of his first three cuts to start the season on the Mackenzie Tour and sits 63rd on the Order of Merit, said he’s felt at home on the 7,301-yard Dakota Dunes layout since he arrived earlier this week and is excited about the prospect of competing here on the weekend.

“I’m just comfortable out here. As soon as I got out of the car on Monday and was able to hit a few drivers on the range and the course, I was able to settle in and keep my composure and stay focused and positive,” said Onesi.

Earlier in the day, Reach carded the low round of the week with a 9-under 63 to post the clubhouse lead at 13-under, which Guillaume matched with a 65.

The 36-hole cut came at 6-under par, matching the 2013 SIGA Dakota Dunes Open and the 2008 ATB Financial Classic for the lowest cut in TOUR history.

Canadian Matt Hill is currently T11 after a second round 68.