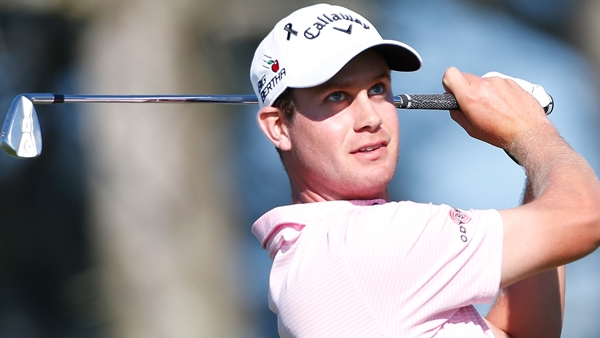 SAN DIEGO – Tiger Woods is gone from Torrey Pines, and Phil Mickelson joined him Friday by missing the cut.

In a tournament that quickly lost a big chunk of its star power, Harris English played another bogey-free round for a 6-under 66 on the North Course to build a two-shot lead Friday in the Farmers Insurance Open.

Mickelson, who worked hard to get into shape in the offseason and was as optimistic as ever, was done in by his short game. The best he could managed was a 72 on the North Course, and he missed the cut by two shots. It was the first time since 2002 that Mickelson missed the cut in back-to-back weeks on the PGA Tour.

Woods withdrew after 11 holes Thursday, citing tightness in his lower back. For the first time, Woods and Mickelson failed to make the cut in the same tournament in consecutive weeks on the PGA Tour.

“My putting is beyond pathetic,” Mickelson said. “And if I can’t get back to the levels of 2013, I’m not sure what I’m going to do. Because this is very frustrating.”

Mickelson is not playing the last two weeks of the West Coast Swing because his kids are on spring break.

He was in good company leaving early.

Justin Rose, at No. 5 the highest-ranked player at Torrey Pines, also shot 70 on the North and missed the cut. So did Hideki Matsuyama, who three-putted for par on the closing hole on the South Course to miss by one shot; Jordan Spieth, who needed an eagle on the 18th on the South to make the cut and hit it in the water; and Dustin Johnson, playing for the first time since a six-month break to get professional help for “personal challenges.”

“The last two days, I think normally I probably would be at least 5 or 6 under right now instead of even par,” Johnson said. “But I’m happy with where it’s at. Just a little rusty, that’s all.”

Mike Wier shot 74-74 and failed to advance to the weekend.

Even those who are still around had a tough time, particularly Phoenix Open winner Brooks Koepka.

He reached the par-5 18th in two on the South Course and a two-putt birdie would have put him three shots out of the lead. Koepka missed his 6-foot birdie attempt, and then missed a pair of 2 1/2-foot putts and wound up five-putting for double bogey. That gave him a 74 and he was six shots behind.

English was at 10-under 134, two shots ahead of Nick Watney (65), Jhonattan Vegas (69) and Martin Laird, who had another 68. Laird was tied for the lead with two holes to play in Phoenix last week until a bogey-double bogey finish.

Most pleasing to English was a clean card going into the weekend. He was on the ropes early on Thursday he chipped through the green on the par-3 11th hole on the South and was facing certain bogey. But he chipped in for par, and he has only had a few close calls with bogey ever since.

English kept it simple on the North by making three birdies on the par 5s. He two-putted twice, got up-and-down with a simple chip on the ninth hole and was poised to add another birdie on the par-5 18th until his 6-iron went long and into a tough lie. He chipped to 20 feet and two-putted for par.

Even so, it was another solid start to a tournament this year after going through some choppy play in 2014 that eventually led him to change swing coaches. English tied for third in the Sony Open, well behind a runaway by Jimmy Walker.

“When you start struggling, it’s easy to try to find stuff that’s wrong with your game, wrong with your swing,” he said. “I definitely was more swing-oriented than playing golf. That’s not me. That’s not how I grew up playing the game. You’re standing over shots thinking about swing positions instead of trying to see your ball flight and trying to play golf. That’s what I was doing the latter half of the year, it was really frustrating.”

Still, nothing summed up the day – the entire week – than when Mickelson finished his round. A stream of fans four-wide stretched for 100 yards on the path toward the exit, dozens of them wearing blue-sleeved shirts that read, “Team Phil.”

Mickelson tied for 24th in his season debut at the Humana Challenge before missing the cut at Phoenix and Torrey Pines. He said he spent so much time on his long game that he didn’t put as much work in on his putting because he didn’t feel he needed it.

That’s no longer the case.

“It was one of the worst putting performances, and the first few weeks really have been the same way,” Mickelson said. “And you simply can’t compete at this level putting like that.”

One player who did get his putter working Friday was Canada’s Adam Hadwin, who has a share of 33rd with fellow Canuck Roger Sloan. Hadwin used his flatstick to sink this lengthy putt for eagle.