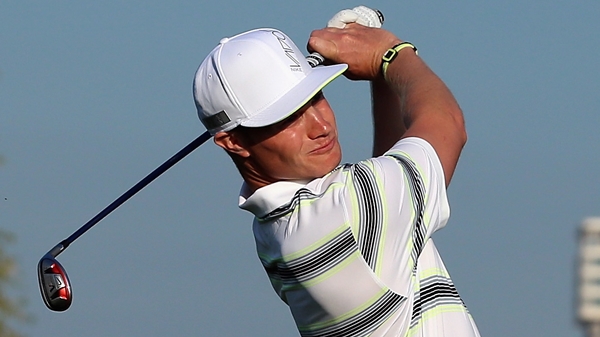 DOHA, Qatar – Oliver Fisher carded eight birdies on the opening day to take a solo one-shot lead at the Qatar Masters on Wednesday.

The Englishman’s only blemish in a 7-under-par 65 was when he bogeyed the 13th hole, but he edged Rafael Cabrera-Bello of Spain by one stroke on an eventful first day at Doha Golf Club.

“I played nice, it was a little bit breezy, and I felt like I controlled my golf ball,” said Fisher, who won the Czech Open in 2011 but then went two years without finishing among the top-10 before finding his form last year.

Ernie Els and Paul Lawrie were among 11 players tied for third at 5 under. Els was especially pleased with his putting.

“I’m actually not a grumpy guy, I’m quite a happy guy, but when you’re not making putts, you can’t help yourself,” Els said.

Fisher started in the afternoon from the 10th hole and posted a hat trick of birdies from the 16th hole before carding three more on Nos. 4, 6 and 8.

Defending champion Sergio Garcia, making his first European Tour start of the season, finished at 3 under.

Cabrera-Bello set the early pace by playing an immaculate opening round with six birdies. His best came on the par-3 8th where his tee shot finished few feet away from the pin.

“I had a good stretch from 16 (hole) to 2, which for me are the birdie holes where you can go low,” the two-time European Tour winner said. “I managed to do that with four birdies there, and just kept playing solid till I got home.”

“They kind of made us feel like there’s a score to be had out there,” Rose said. “It’s nice to be somewhere in contention, and it’s a score on which to build for the rest of the week.”