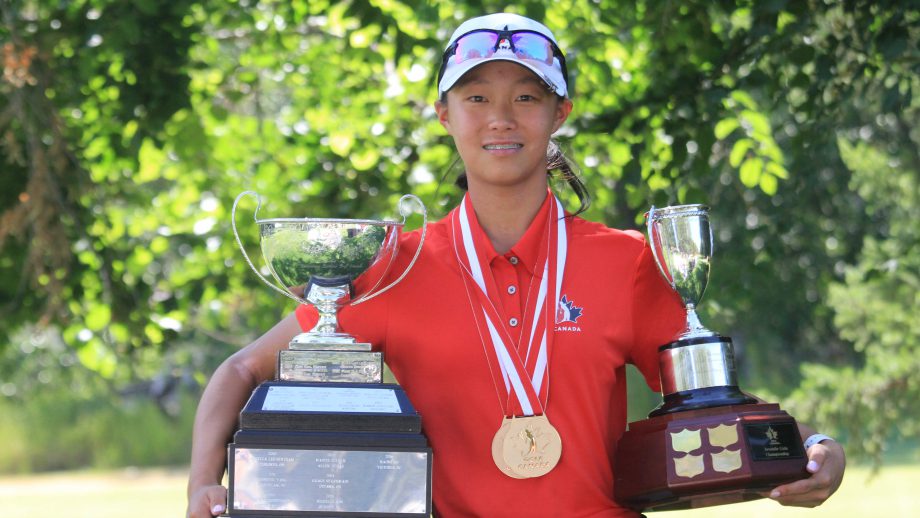 Zhu finished the tournament at 13 under, having posted her first career bogey-free round on Thursday. She finished five strokes ahead of YanJun (Victoria) Liu (Vancouver) and Céleste Dao (Notre-Dame-de-l’Île-Perrot, Que.).

“I’m still kind of in shock,” said Zhu. “Going into this tournament I really wanted to win, so this win makes me feel really, really good. I tried to play it like yesterday – focus on my shot and focus on hitting each one as good as I can.”

It was an eerily similar situation to last year for Zhu. In 2018, she was in the final group and only one stroke back of the leader, eventually finishing in second. This year was different however, with the Team Canada National Development Squad member surpassing 54-hole leader YanJun (Victoria) Liu.

“I focused on each shot – don’t overthink anything,” said Zhu. “Make sure that the shot at hand is going to be as good as I can.”

A pivotal moment came on the par-4 No. 11, where Zhu birdied and Liu double-bogeyed. The three strokes gained on the hole were more than enough for Zhu.

The 15-year-old also won the Juvenile Girls Championship (for 16-year-olds and under) for the second consecutive year, with Liu finishing runner-up and Brooke Rivers (Brampton, Ont.) coming in third. As the Canadian Junior Champion, Zhu earns an exemption into the 2020 Canadian Women’s Amateur Championship.

Liu and Dao finished runner-up at 8 under. Liu carried a two-shot lead into the final round, but shot 3 over.

Dao, the defending champion, carded 3 under 69 on Friday. She made three birdies in the final round of her career as a junior competitor. The 18-year-old made the cut at all six the Canadian Junior Girls Championships she played.

Brooke Rivers (Brampton, Ont.) finished fourth at 5 under for the tournament, eight back of Zhu.