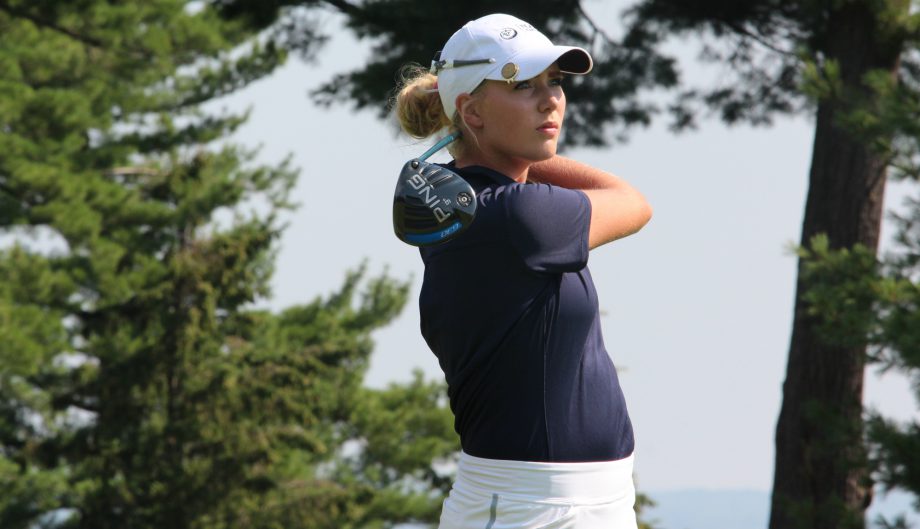 Ellie Szeryk, from London, Ont., carded a 1-under-par 71 for the second consecutive day to hold a one-shot lead in the second round of the Canadian Junior Girls Championship at Camelot Golf and Country Club.

Play was suspended for the day at 6:30 p.m. due to dangerous weather after being originally halted at 4:28 p.m. 65 golfers were unable to finish their second round.

Team Canada Development Squad’s Mary Parsons from Delta, B.C. and 18-hole leader Susan Xiao of Surrey, B.C., are one stroke back of Szeryk in a tie for second at 1 under par.

Szeryk, 15, had three birdies in Tuesday’s second round, and only one blemish on her card, a double-bogey on No. 11. She took advantage of her length off the tee and had wedges in her hand on several holes.

“I had a lot of good wedges and made some clutch putts for par,” said Szeryk. “And I think my ball-striking was pretty good overall today.”

Parsons had eight birdies in round two, but was plagued by inconsistency, recording 5 bogeys and a double-bogey to card a 1-under-par 71.

“I had eight birdies today so almost half the holes were under par,” said Parsons. “My bad holes were because of approach shots from the fairways. Some tightening up of irons and I should be good to go for tomorrow.”

The 18-year-old is playing in her last junior tournament, but she’s not going to let the weight of that affect her over the final 36 holes.

“Everyone is going to have to shoot a good score out here, and I don’t want to be the person standing in my own way,” added Parsons. “I think knowing I have the shots for this course and the amount of birdies that I made today is a confidence booster.”

Xiao led the way after 18 holes at 2 under par. She carded a 1-over-par 73 in round two, with missed opportunities preventing her from going lower.

New Zealand’s Momoka Kobori is in fourth at 1 over par after a 1-under-par 71 in round two.

Parsons’ Development Squad teammate Monet Chun from Richmond Hill, Ont., had the low round of the day Wednesday, posting a 2-under-par 70, moving into a tie for fifth at 2 over par alongside fellow Development Squad golfer Hannah Lee.

Click here to view the full leaderboard for the 2017 Canadian Junior Girls Championship.