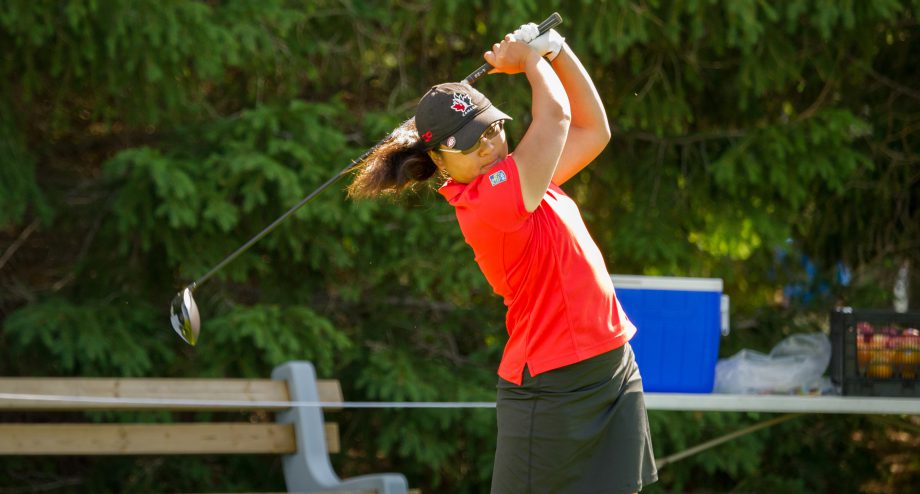 Tong’s impressive bogey-free round of 8-under-par 62 not only was the low round of the day, but was also low enough to set a new women’s competitive course record at Burlington Golf and Country Club.

“I didn’t really even realize I was five-under-par on the front nine until I got to No. 11 and I was like, “Oh, wait a minute I’m going pretty low,’” the amateur said. “This golf course seems pretty open to me, so it really doesn’t scare me. The greens are rolling really nicely right now, so you can easily roll them on the line you want.”

“We play a lot of tournaments and it definitely keeps me busy,” she said about her first year on the national team. “It’s a lot of information intake and literally I’m learning new things every single week.”

Brooke Henderson, who won the 2014 PGA Women’s Championship of Canada, sits three back in second place after a first round 5-under-par 65.

“Overall it was a pretty good day and I’m right there in the mix,” Henderson said about her round that featured six birdies, an eagle, a bogey and a double-bogey on No. 18. “I was very fortunate to win this championship last year and I’m hoping to do the same this year.”

In 2014, Henderson became not only the first amateur to capture the PGA Women’s Championship of Canada, but the youngest as well. As a 16-year-old she posted a two-day total of 13-under par at FireRock Golf Club in Komoka, Ont., setting a new championship scoring record.

In addition to her two top-five finishes in majors this year, Henderson has four more top-25 finishes on the LPGA Tour in 2015, including a third at the Swinging Skirts LPGA Classic. The former Team Canada member also won the Four Winds Invitational on the Symetra Tour in June and has a pair of Suncoast Ladies Tour wins to her name this past winter as well.

American Sydney Cox also posted a 5-under-par round of 65 will join Tong and Henderson in the championship’s final group at 12:38 p.m.

Doris Chen put together a 4-under-par 66 first round, while Stephanie Connelly rounds out the top five after posting a 3-under-par 67. Kyla Inaba of Kelowna, B.C., and Stratford, Ont.’s, both shot two under and are T6. Amateur Valerie Tanguay of St. Hyacinthe, Que.; Samantha Richdale of Kelowna, B.C.; and Americans Lauren Mielbrecht, Brooke Baker and Michele Chun are T8.

Full results from the first round as well as second round tee times are available here.

The PGA Women’s Championship of Canada will count as the third and final stop on the Canadian Women’s Tour with points awarded toward the Jocelyne Bourassa Player of the Year at the conclusion of the championship.