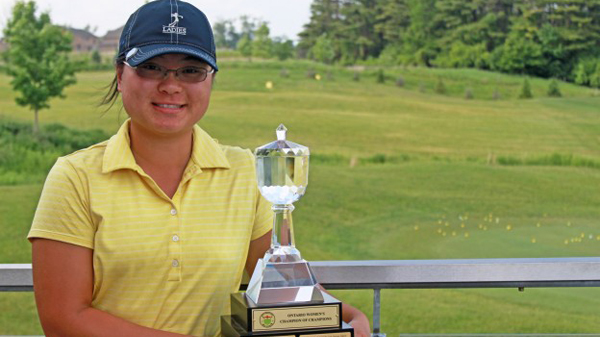 WATERLOO— It was a dramatic end to the day, on June 11 at the Golf Association of Ontario’s (GAO) Women’s Champion of Champions event, as 18 holes at Grey Silo were not enough to crown a winner. In the end it was two more holes for two players who were paired together throughout the day – Thornhill’s Elizabeth Tong and Kitchener’s Sarah Dunning, with Tong eventually earning the victory.

The pair finished their rounds both at one-over 72, four strokes better than the next closest players. For Tong, the 21-year-old member of the University of Indiana golf team, she was able to jump out to the lead on the front nine. However, her playing partner, 19-year-old University of Toronto team member Dunning, would make a charge on the back nine, playing it two-under par. That forced a playoff, beginning on the first hole.

Both players made par on the first playoff hole and they moved to the nearby 18th to try and decide a winner. After Tong, the Ladies Golf Club of Toronto member, played her tee shot in the middle of the fairway, Dunning, representing the Galt Country Club, struck hers well left into very tall grass. She was able to find it, but was forced to take an unplayable lie. Even though she recovered, that stroke allowed Tong to three-putt for the win.

“It was really fun to win the Champion of Champions,” said Tong. “I actually thought it might be over after the first playoff hole because she (Dunning) hit it really close and I thought she would make the putt. Things turned in my favour though, when she found the deep grass and I knew I had a five to win, but I was still nervous.”

Even though Tong controlled things for most of the day, since she was playing with Dunning, Tong knew just how close her opponent was to catching her. “It was fun to watch her because she was making all of these long putts to save par and make birdie, but at the same time I knew she was getting closer.”

Tong admits to a few mishaps on some holes, but says she felt like she played decently throughout the round. “I would definitely say the strongest part of my game today was my putting, even though I three-putted the final hole. Still, the rest of the day I was two putts or less.”

Finishing in a tie for third were Oshawa resident and Kendron Dells Golf Course member Lynn Morrison and Kelly Koselek from Toronto and Cedar Brae Golf & Country Club who each shot five-over 76.