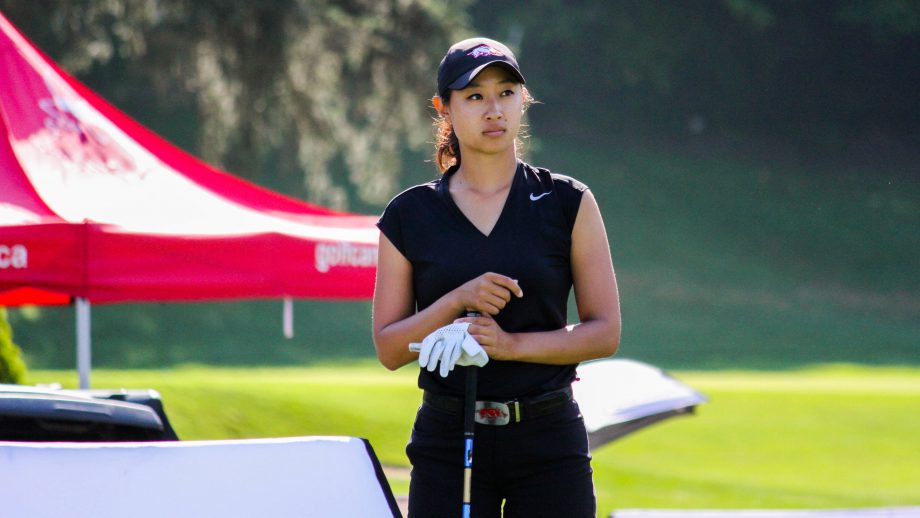 VANCOUVER, B.C. – Dylan Kim shot a 5-under 66 at Marine Drive on Thursday to head into the final round of the Canadian Women’s Amateur Championship with a one-shot lead.

For the second time in three rounds, Kim carded a 66 to move her to 12-under par for the tournament. She had a bogey free round and made some great putts.

Kim played a very smart round, regardless of missing the fairway on a few holes.

“There are some tricky holes out here and it is narrow, so I think it is smart to know which side you can recover from and which side you can’t, so I’ve done that well,” said Dylan Kim. “I actually didn’t make that many fairways today. I don’t really know how many I hit, but I didn’t drive it that well, so I’m going to go work on that now.”

Dylan Kim started the round in a tie for the lead with Gina Kim and Yealimi Noh. Noh tried hard to catch up to Kim after she bogeyed her first hole and watched carefully at the end of the round as Dylan Kim made her final putt on hole 18.

“My round started off a little rough on the front nine with one birdie and one bogey,” said Noh. “The back nine I started putting a little better.”

When Noh made the turn, she tried her best to catch up to Dylan Kim. The 16-year-old from Concord, Calif. birdied hole 10, just as Dylan Kim did. Dylan Kim then continued to birdie hole 11 while Noh pared it.

But that didn’t stop Noh. She continued to birdie hole 12 and 13 but couldn’t quite catch Dylan Kim and they both carded one more birdie each.

“This course is very challenging and narrow with all the trees. All the courses I’ve played in California aren’t really like this, it’s a little different,” said Noh, who has never played on a Canadian course.

Yealimi Noh ended the day 4-under-par 67, 11-under for the tournament, just one stroke behind Dylan Kim.

Gina Kim carded three birdies and three bogeys to finish even par, her first time in three rounds finishing with a score in the 70s. She remains at 7-under for the tournament in third.

Gina Kim, Dylan Kim and Yealimi will play together again tomorrow and make up the final grouping while Lilia Kha-Tu V (-6), Allisen Corpuz (-5) and Jennifer Chang (-5) will tee off in front of them.

The Vancouver B.C. native, Tiffany Kong, still remains the top Canadian on the leaderboard after the third round. She carded a 3-over 74 today to push her into a share of ninth with Kaitlyn Papp from Austin Tex at 2-under for the tournament.

The 2018 Canadian Women’s Amateur title, the individual champion will earn an exemption into the 2018 U.S. Women’s Amateur Championship and – along with the low Canadian – the CP Women’s Open at Wascana Country Club on August 20-26, 2018.