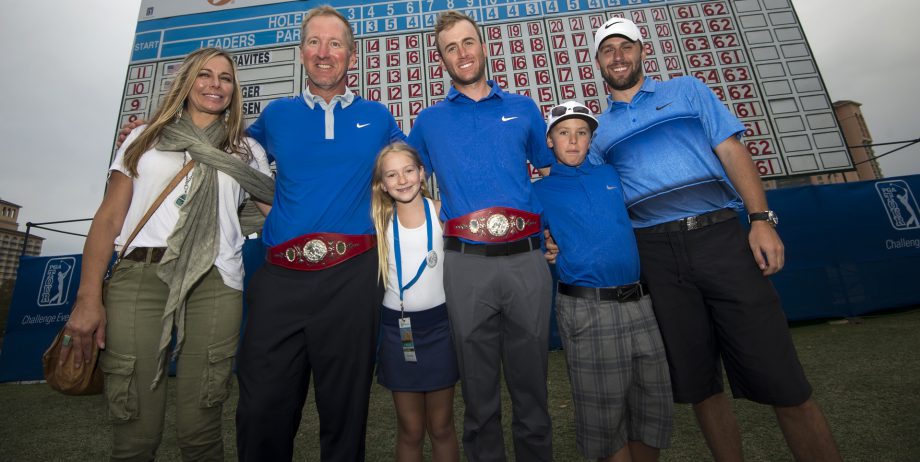 ORLANDO, Fla. – David Duval and stepson Nick Karavites shot a 10-under 62 on Sunday to win the PNC Father/Son Challenge by a stroke.

Duval and Karavites finished at 21-under 123 in the scramble event at Grande Lakes to hold off 2013 winners Stewart and Connor Cink, newcomers Retief and Leo Goosen, and Fred and Taylor Funk.

“This is as good as anything,” Duval said. “It truly is. I know it’s not winning The Players or something like that, but this is what the progression of life is. To be able to come out in a professional event and win and have the whole family here, I’ll never forget it.

“I came home and talked with Susan my wife about six weeks ago and said, ‘You know if I play like I’m playing and Nick plays like he’s playing, we have a chance.”’

“Being here with my mom, my brothers and my stepdad, it was amazing,” Karavites said. “We were playing so good and it didn’t seem like too much pressure. Just being with David out here, I’ve been looking forward to this for a long time.”

The Goosens and Cinks shot 61, and the Funks had a 62. Team Goosen missed 10-foot birdie putts on 18 that could have tied them for the lead. Retief saw nothing but positives, though, from 13-year-old Leo.

“He’s learning a lot how to manage his game this week, how to think around a course,” he said. “He’s only going to get stronger. He stayed positive.”

Event newcomers John and Little John Daly shot 63 to tie for ninth at 17 under.

“The way L.J. played this week, I’m so proud of him,” Daly said. “He’s been clutch all week. It’s been a great week for me. The progress for him to see it under the gun, the way he performed, it was incredible.”

Jack Nicklaus and Jack II had a 68 to finish at 5 under.

“We were a little better than yesterday but basically it’s what (Jackie) did,” Nicklaus said.