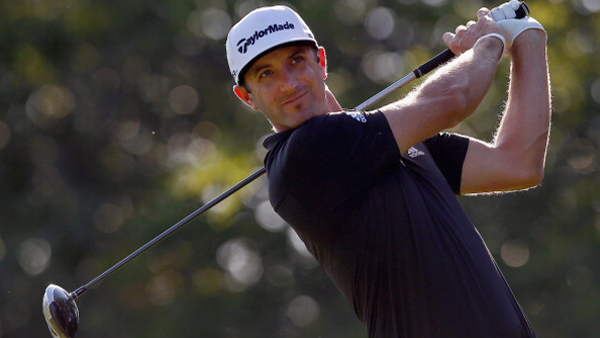 FORT WORTH, Texas — Dustin Johnson had played Colonial only once before, six years ago when he didn’t even make it to the final round.

In his return to Hogan’s Alley, Johnson took a one-stroke lead after the first round.

Johnson shot a bogey-free 5-under 65 on Thursday, driving a lot of 3-irons off the tees into the fairways and hitting 16 of 18 greens in regulation.

“I’ve got to keep doing what I’m doing,” Johnson said. “I’ve got a pretty good game plan for the golf course off the tee. So I’m going to stick to that, just trying to keep getting birdie looks on every hole.”

His only birdie on the back nine was a 2-footer at the 177-yard 16th hole. That was enough to lead after his front-side 31 that included a 45-foot birdie putt on the difficult par-4 fifth hole.

Hunter Mahan, playing in the group ahead of Johnson, led before a double-bogey 6 at the 433-yard 18th hole for a 66. He was tied for second with Harris English, Tim Wilkinson and Robert Streb.

Jimmy Walker, a three-time winner this season, and 20-year-old Dallas native Jordan Spieth were in the group of 10 players at 67.

Mahan started eagle-birdie and was already 6 under after a 3-foot birdie on the 178-yard eighth hole. He had two bogeys and two more birdies before his drive at the 18th hole into the right rough, with trees blocking a clear shot to the green. After punching the ball back into the fairway, his approach came settled on the edge of the fringe and he eventually two-putted from 7 feet.

“You have to get over it,” Mahan said about the disappointing 18th. “It’s all about the drive there.”

Adam Scott, playing as the No. 1 player in the world for the first time, shot 71 after playing his first nine holes at 4-over 39.

Scott had bogey-6 on the straight 631-yard 11th hole, his second of the day, when he hit twice from fairway bunkers. After a two-putt from 11 feet at the 433-yard 18th hole, Scott was bogey-free the rest of the way, with consecutive short birdies after making the turn.

“I thought I actually hit plenty of good shots,” Scott said. “All of a sudden, I had the momentum going the way I wanted and managed to hang on for the next few holes.”

The Australian said he felt the same as he did before this week when he overtook injured Tiger Woods for the top spot in the world ranking.

“There’s not a big difference,” Scott said. “It’s always the first tee nerves of starting a tournament out, but I certainly didn’t feel that much different.”

Johnson’s 65 was the highest score to lead after the first round at Hogan’s Alley since another 65 in 2002. There were opening 62s in two of the previous three Colonials.

When he first played at Colonial in 2008, Johnson made the initial cut. But after a 72 in the third round, he was among six more players trimmed to reduce the field to 73 for the final day.

Walker, the FedEx Cup points leader, also played a bogey-free round with a tremendous par-saver at the 470-yard fifth hole after hitting his drive left into the rough under trees. With the ball on a hill several inches below his feet, he hit an off-balance shot to the left of the green. He then chipped up over the bunker, and the ball rolled to inside 4 feet of the cup.

“I kind of had a shot, and I went for it,’ he said. “I had a big high cut over the trees, and didn’t hit a very good shot, but it came up just short of the green, and made a great up and down there.”

Matt Kuchar, ranked No. 4 in the world and with a chance to move to the top with a victory, had birdies at Nos. 11 and 12 early in his round. He then had five bogeys before finally getting his only other birdie on his 16th hole, an 11-foot putt on the 437-yard seventh hole, in a 72. That matched his highest score in his 29 career rounds at Colonial, where he finished second last year.

Rickie Fowler, who stars in a series of funny commercials for tournament sponsor Crowne Plaza, played with flu-like symptoms and had two triple bogeys in an 80, the worst score in the 123-player invitational field.

Canada’s David Hearn ended the day tied for 6th after a 3-under 67. Graeme DeLaet carded a 1-under 69 and will be heading into the second round tied for 24th.