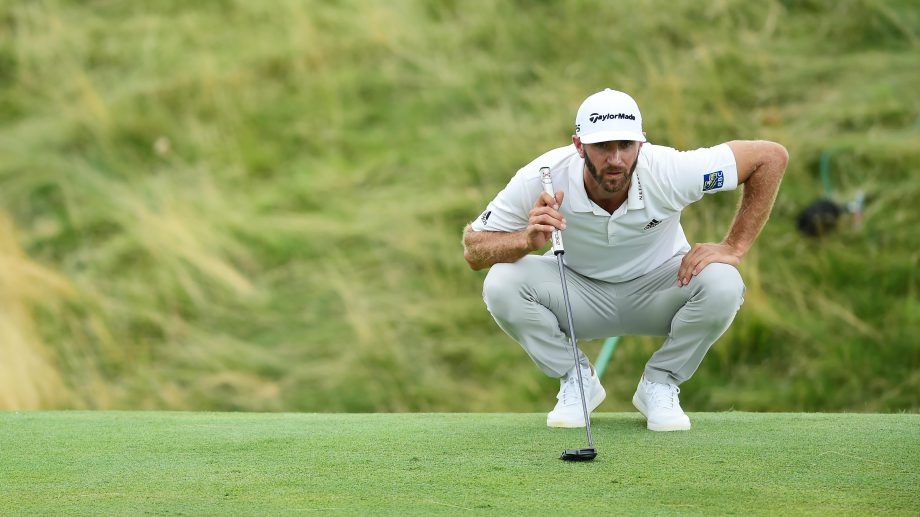 JERSEY CITY, N.J. – Dustin Johnson has missed nine birdie chances from 10 feet or closer at Liberty National, which ordinarily might annoy him.

He’s hitting it so well that he still leads The Northern Trust Open.

Johnson birdied three of his last six holes Friday, finishing with an approach to 8 feet on the 489-yard closing hole, for a 4-under 67 that gave him a one-shot lead over Jordan Spieth (64) going into the weekend.

Johnson has won this FedEx Cup playoffs opener twice at other courses. He was at 12-under 130.

“I’ve got a lot of control with the golf ball and hitting a lot of really nice shots and rolled in a couple putts today which is nice, but still feel like I left quite a few out there,” Johnson said. “I’m in a good position heading into the weekend, and if I can keep swinging the way I am, I think it’s going to be a good weekend.”

The weekend does not include Masters champion Tiger Woods, and neither did Friday.

Woods, who opened with a 75, withdrew a few hours before his second round was to begin because of what he described as a mild strain to the oblique that Woods says was causing pain and stiffness. It’s the first time he withdrew in the middle of a tournament since February 2017, two months before fusion surgery on his lower back. He said he was hopeful to play next week at Medinah.

Spieth might be finding some form at just the right time. Winless in more than two years, he started the PGA Tour’s post-season at No. 69 in the FedEx Cup with no assurance of staying among the top 70 who advance to next week at Medinah.

He might be one round away from thinking more about winning. Spieth was on the same score (131) that he was going into the weekend last week at the Wyndham Championship, where he followed with a 77 and missed the 54-hole cut. His shots have been tighter, his misses not that severe and he even got some good fortune on his final hole that led to a birdie and a spot in the last group with a familiar face.

Johnson and Spieth have played together at the AT&T Pebble Beach Pro-Am each of the last five years.

The opening playoff event had a strong cast of contenders, with Jon Rahm and Patrick Reed two shots behind, and Justin Rose and Rory McIlroy among those another shot back. McIlroy was just happy he wasn’t farther behind.

He walked off the par-3 14th with a double bogey because of a two-shot penalty from the bunker. McIlroy went to remove a small stone next to his ball, but realized when he touched it and it disintegrated that it was a clump of wet sand from a brief storm delay.

The original ruling was a penalty. The PGA Tour reviewed it as McIlroy played the last four holes, spoke to him after the round and determined that was no intent to improve his lie. His 70 became a 68.

“The reason I called someone over is I don’t want anything on my conscience, either,” McIlroy said. “I feel like I play the game with integrity and I’m comfortable saying that I didn’t improve anything. I thought it was a rock. It wasn’t. I moved my hand away, and then I was like, ‘I don’t know if I’ve done anything wrong here.’

“It came down to me and they said, ‘OK, are you comfortable telling us you didn’t improve your lie?’ And for me, I am comfortable saying that.”

Missing the cut meant the end of the season for at least two dozen players who would not be among the top 70, which includes Bubba Watson. Sergio Garcia would appear to be a casualty having started at No. 65 and not making it to the weekend.

The first step for Spieth was to make sure he stayed in the top 70. Now it’s about contending.

“The important thing for me is not to get ahead of myself,” Spieth said. “Historically, I’m a very consistent player. I’ve lost a bit of that. I still have the firepower but that consistency is what I’m trying to get back, and there’s certainly going to be times where I’m out of position over the weekend. It’s about limiting mistakes. One bogey over 36 holes is somewhat unrealistic week to week. But if I can hold it close to that for the next 36, again, that firepower is still there. And it would certainly shoot my confidence up.”

Johnson’s year has been quiet since winning a World Golf Championship in Mexico City for his 20th career victory. Another year passed without winning a major. He was runner-up in the first two majors, but he hasn’t finish better than 20th since the PGA Championship.

He feels the consistency in his swing is returning. And while he’s not making everything, he’s making enough and likes the way he’s rolling it.

“I feel like I’m stroking it well right now,” he said. “I worked on the stroke a lot the last couple weeks and feel good and I have confidence in it.”