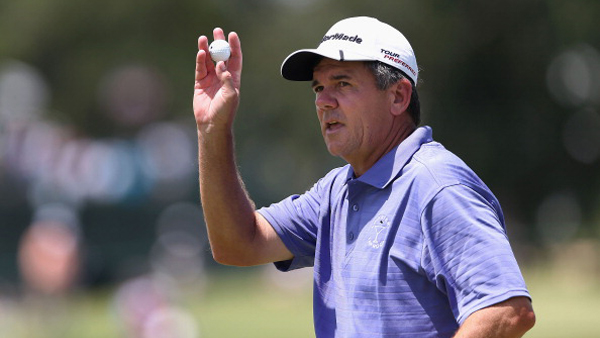 SNOQUALMIE, Wash. – Scott Dunlap won the Boeing Classic on Sunday when he made a short birdie putt on the first hole of a playoff against Mark Brooks.

Dunlap set up his winning putt on the par-5 18th hole with an outstanding approach to the right of the pin that bounced past the hole, and then drew back downhill to within four feet. He missed his eagle try but made his next putt for his first Champions Tour victory.

“I couldn’t see anything (on his approach),” Dunlap said. “The cheers were letting me know.”

Dunlap, who has played multiple tours through his career with seven worldwide victories, did not win in his three stints – covering seven seasons – on the PGA Tour. His best finishes were three thirds. He won a couple times on the Web.com Tour, his last victory in 2008.

“It means the wait was worth it,” Dunlap said.

Brooks, who put himself in jeopardy by landing in a bunker on his drive, just missed a 30-foot putt on his fourth shot.

“That tee shot got me in a funny spot,” Brooks said.

It was the fifth playoff in the 10-year history of the tournament at TPC Snoqualmie Ridge.

Brooks made a dramatic closing run on the back nine to earn his spot in the playoff. He had five straight birdies and six over his final seven holes to finish with a 7-under 65. He had a 6-under 30 on the back nine, one off the course record.

Dunlap, in the final group on the last hole, put his approach shot into the left bunker. His pitch out rolled seven feet past the hole but he missed his putt to the left and had to settle for the playoff.

Brooks, the 1996 PGA champion, won seven times on the PGA Tour but has not had a victory in his four years on the Champions Tour. In his three previous appearances at Boeing, he had not finished better than tied for 57th.

Seven players were within a shot of the lead as they approached the turn when Dunlap eagled the par-5 eighth hole with a 45-foot putt over a ridge. That put him two shots ahead of the field at 13 under.

“I felt good at that point and then I played good sensible, what I felt, winning golf,” Dunlap said. “But not quite. Turns out I needed one more birdie.”

However, both Doug Garwood and Tommy Armour III birdied No. 8 to bring them back within one.

Dunlap and Armour then broke away. Both birdied No. 10 and Dunlap followed with a birdie on No. 11 for a two-shot advantage over Armour.

Armour had the misfortune of hitting the pin on his approach to the 12th green and the ball caromed back well off the green. He settled for a par but needed more. He bogeyed No. 13 and his pursuit was over.

Dunlap, wedging his approach on No. 14 to within three feet, dropped in his birdie putt to extend it to 16-under and a three-stroke lead at the time.

Fred Couples, the hometown favorite, shot one of the best rounds of the day at 6-under 66. He finished with an 8-under 208 for 15th place.

Bernhard Langer, the overwhelming leader in the Charles Schwab Cup standings, also tied for 15th, finishing outside the top 10 for just the second time in 17 starts this season. His worst previous Boeing finish was tied for 11th twice.