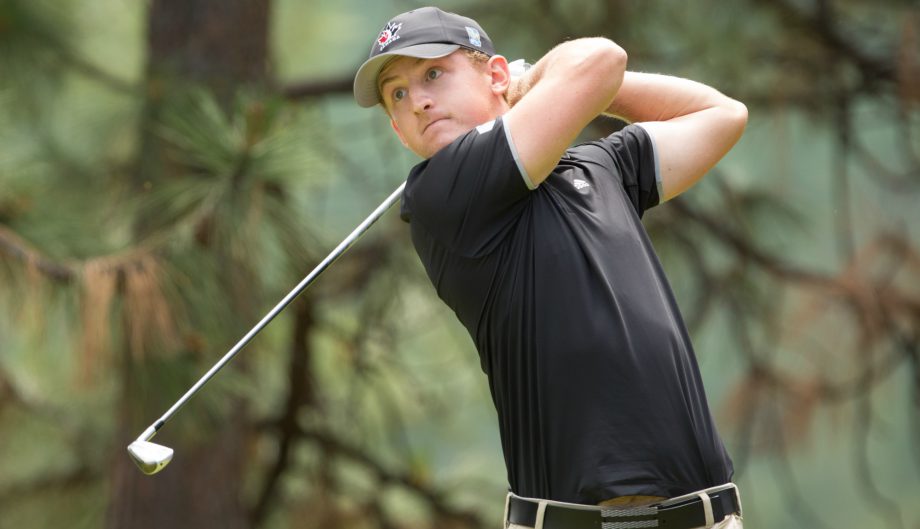 Kimberley, British Columbia’s Jared du Toit, Honolulu, Hawaii’s Lorens Chan and Atherton, California’s Jonathan Garrick all reached 8-under par and shared the second-round lead before play was suspended due to darkness at the Staal Foundation Open presented by Tbaytel, the fifth event of the 2017 Mackenzie Tour – PGA TOUR Canada season.

Du Toit, a Golf Canada National Team member, carded a 2-under 70 to post the clubhouse lead through 36 holes and was matched shortly after by Chan thanks to a second-round 67, while Garrick reached 8-under through seven holes of his second round when play was called for the day.

“I did a pretty good job of committing to every shot. I was never too far out of position, and the few times I was, I was able to recover pretty well. It was a grind, but I’m definitely happy with the way it went,” said du Toit, who played 35 holes on Friday.

Productive day at the office for @Jareddutoit.

He's 8-under heading to the weekend at the #StaalOpen. pic.twitter.com/OpRUw1vvLe

du Toit is coming off a standout amateur career that concluded in June with his senior season at Arizona State University, where he was named a 2017 NCAA 2nd team All-American.

He captured the attention of a nation last year when he played his way into the final group on Sunday at the RBC Canadian Open before finishing T9.

Du Toit turned professional at the Bayview Place Cardtronics Open presented by Times Colonist and earned status on the Mackenzie Tour by placing inside the top-60 on the Order of Merit through the first re-shuffle after last week’s Players Cup.

Like du Toit, Chan had only just teed off on his first hole when play was suspended Thursday and made it through a marathon day with rounds of 69 and 67 on Friday to share the lead.

“It was just about making sure I could last all day, because I knew it was going to be hot and humid. I just wanted to stay level and not use too much energy,” said Chan, who finished his day with a birdie at the difficult par-4 ninth. “I’m not gonna lie, I was pretty tired towards the end. Nine’s a tough hole, but I hit a good tee shot. It was nice to finish with a birdie.”

Garrick’s day started early and finished late, having completed two holes – and making birdie at both – this morning to conclude an opening 7-under 65, then coming back in the evening to get his second round started.

“I feel good about my game. I’ve had stretches where I played well, but I’m starting to feel calmer mentally on the golf course, so to put together a bunch of good holes and put myself in position is good just because I haven’t done that yet this year,” said Garrick.

78 players were left to complete round two when play was suspended and will resume in position at 8 a.m. on Saturday morning.