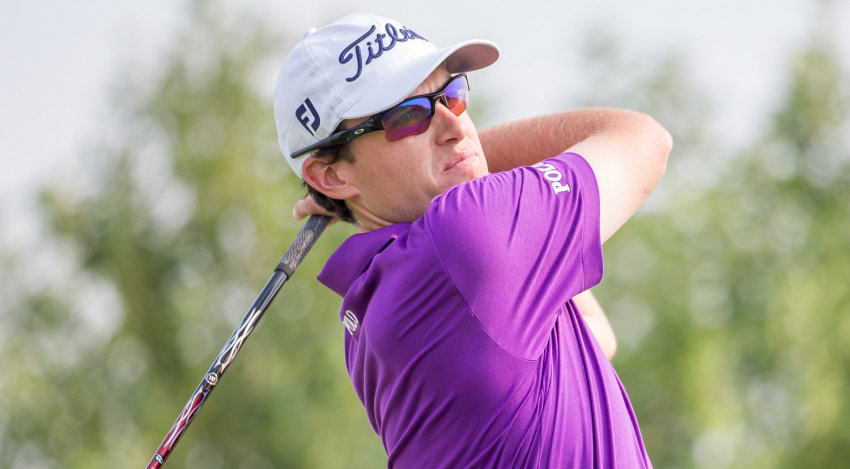 WINNIPEG, Man. – Mackenzie Tour – PGA TOUR Canada Order of Merit leader Drew Weaver fired a 5-under 66 in windy conditions on Thursday at Pine Ridge Golf Club to take the first round lead at The Players Cup, the fifth event of the Mackenzie Tour season.

With gusting to more than 40 km/h, the 28-year old from Atlanta, Georgia recorded seven birdies to offset two bogeys and was one shot ahead of Moscow, Idaho’s Chris Williams after day one in Winnipeg.

“It was a good start. I’m pleased with how I rebounded from a poor first hole. It was the ultimate sloppy start and I was able to bounce back and make some good swings from there on,” said Weaver, who opened with a bogey on the first hole but came back strong with birdies on four of his next six holes. “I was able to string together a number of good iron shots and gave myself a few opportunities there. I dialed it back a bit and realized par is a good number.”

Weaver, who won the PC Financial Open in a playoff earlier this year and has added two more top-10 finishes to build a lead atop the season-long money list over Toronto’s Albin Choi, said the tricky 103-year old Donald Ross-designed Pine Ridge was a perfect fit for his game heading into the week in Winnipeg.

“I think it’s right up my alley. You can’t overpower this place, and it’s fairly generous off the tee so it’s really a strategy-based golf course. You can do a number of different things on some holes out there. Today I was able to get the putter a little warm and that yielded a good score,” said Weaver, who credited his solid play this season in Canada to a more mature approach to tournament play.

“I’ve done a much better job of believing in myself and kind of getting in my own bubble. I play to my strengths each week and some courses set up better for me. Thankfully I’ve been able to keep working on the right things and I feel very comfortable with my game is,” said Weaver.

One back of Weaver was Williams, whose 67 was the best round of the afternoon. 12 players – David McKenzie, Ryan McCormick, Joseph Harrison, Jonathan Fricke, Mackenzie Hughes, Cameron Peck, Clayton Rask, Olin Browne, Jr., Justin Shin, Ben Briscoe, Christopher Ross and Vaita Guillaume – were a shot further behind at 3-under 68.