Donalda Club swings back into action with new bentgrass greens 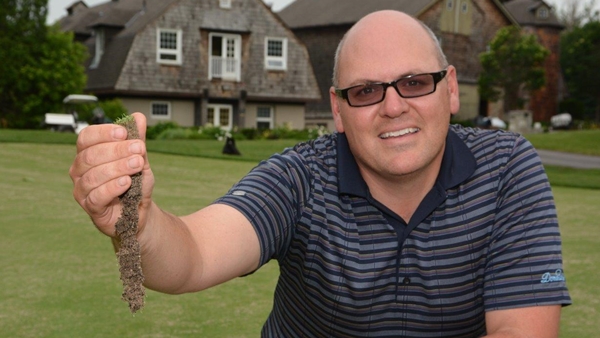 TORONTO – When it comes to timing, Donalda Club appears to be perfectly in sync with Mother Nature’s clock.

On October 3, 2011, Donalda Club’s membership agreed it was time to breathe new life into its aging poa annua greens. They voted in favour of rebuilding the greens to modern USGA standards with a consistent new look and a weather-tolerant bentgrass turf. Looking back, and knowing what we know now, you might think they have a psychic on staff or a crystal ball hidden away in the clubhouse boardroom.

While numerous established clubs across the GTA are scrambling to reseed or resod greens or trying to come up with a plan to deal with devastating winterkill, Donalda’s new bentgrass greens are set to reopen as planned Saturday, June 28th, with a weekend-long celebration highlighted by fireworks for its 800 family members.

“We were out there laying the last of the bentgrass sod on November 18th in the snow. The ground froze just as we were laying the final rolls on the last green, No. 7 and I was a little worried the new sod wouldn’t take,” says Scott White, Golf Course and Grounds Manager at Donalda Club. “Then the winter freeze hit and I got a little more nervous, but all the greens came through the winter in amazing shape. There wasn’t an inch of the new bentgrass that didn’t survive and we just let them mature throughout the spring.”

White’s crew aerified the greens four times this spring, removing 25 per cent of the original turf and filling it with sand to encourage new growth – one more aeration is planned for August. Root growth is now eight to 12 inches deep depending when the sod was laid.

Hole closures started last August at Donalda Club. The entire course shut down with no play whatsoever after Labour Day to allow for the greens rebuild. “I don’t think the golf course has ever been in better shape. A few members have been walking around watching the progress, but there hasn’t been a shot played out there in nearly 10 months,” White added, noting No. 11 was the first green sodded on September 11th.

Donalda Club opened in 1960 with 18 holes designed by golf professional Jimmie Johnstone ready for play in June 1962. The Club called upon noted golf course architect Tom McBroom to redesign the course in 1993-1994. He rebuilt 14 of the 20 putting surfaces including two practice greens, leaving six original greens in the mix. He also renovated the bunkers in 2005-2006.

“What you will find today is that we have created subtle internal contours through the use of soft crowns, muffins and subtle transition slopes within the green complexes, as well as adding some bold contours that will really capture your eye and make reading a putt more challenging,” McBroom says, noting bentgrass fall-a-ways were also added to Nos.4, 10, 11, 13 and 14. “Bottom line is that in my opinion, the new Donalda greens are amongst the best in the country for interest, detail and character.”

It took 15 months to grow four acres of Mackenzie/Declaration (50/50) bentgrass for the greens and four acres of Pencross was seeded for tees and fairways at a turf farm in Beeton, Ont. Overall, the green sizes have been enlarged 15 per cent to 124,455,000 square-feet.

“I think the timing was right to take a fresh look at the greens and do them all this time to modern day USGA standards,” White says, noting the original greens had a roly-poly feel to them, while the newer McBroom designs were more tiered and regionalized. “We needed to find a middle-ground between the two styles to give us some consistency throughout the entire layout. Our 1960’s greens had too much roll and slope and the 1990’s greens were too flat in spots.”

Now there’s more life and motion in every green as the severity is more subtle, but overall the greens should be more playable for members. There is less than a three per cent slope on all parts of all greens allowing for a significant increase in pin position options with many tucked more closely to the green side bunkers.

Aside from the new greens several other changes have been in the works including a larger practice area for chipping and putting near the first tee and an expanded putting green near the golf shop. Out on the course – there’s a new back tee deck on No. 6 that adds close to 70 yards to the par-5 to 560 yards; all of the smaller tee decks on No. 7 have been fused into one huge 7,000 square-foot deck and there’s significantly less fairway in front of the green; on No. 8 there’s a new fairway landing area and the green is nearly 40 yards further back on a new plateau, while on the par-3, 14th hole all tee decks have been completely redone with three expanded levels to give everyone an amazing view of the green, as well as some improvement along the Don Valley River, which comes into play on 14 of the 18 holes. That said, the Golf Association of Ontario increased the slope rating from the back tee decks to 141 from 139.

Despite the course closure, membership sales and development are at an all-time high at Donalda with a very active and engaged membership. Donalda Club is a family-focused, multi-activity facility with varied dining options, Har-Tru indoor and outdoor tennis courts, squash courts, curling, an outdoor pool, a new Fitness Center that opened in September 2013, a new Men’s Locker Room and Indoor Golf Academy with four high-definition golf simulators that opened in 2013 and a renovation to the Ladies’ Locker Room scheduled for this fall.