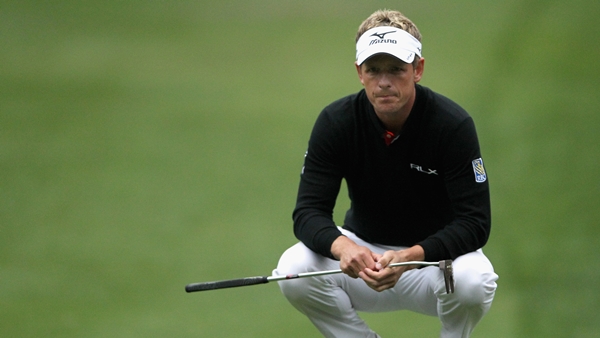 HILTON HEAD ISLAND, S.C. – Luke Donald believes he’s got the right game on the right course – and is ready to make up for so many near-misses at the RBC Heritage.

Donald had an eagle and six birdies to shoot 66 on Saturday and take a two-stroke lead over John Huh after three rounds at Harbour Town Golf Links. The Englishman has done just about everything on Harbour Town the past five times he’s played – except win.

He fell in a playoff to Brandt Snedeker here in 2011, part of a run of four top-3 finishes since at the tricky, Pete Dye design. Now, he’ll carry the lead into the final day and is ready to make it stand up on Sunday.

“If I can go out as relaxed and confident as I was today tomorrow,” he said. “If I can control the trajectory (of shots) as well as I did today, then hopefully I’ll be sitting here as the winner.”

It has been a long time since Donald has been able to say that.

Once the world’s top-ranked golfer, Donald has changed coaches and the transition back to the top has not come as quickly as planned. The last of his five PGA Tour wins came in 2012, his best showing this year was a tie for fourth at the Valspar Championship last month and he was quickly bounced at the Masters after shooting 79-70.

Donald acknowledged he has grown anxious waiting to win again.

“I was the former world No. 1 and was there for a long time and obviously slipped down,” said Donald, currently 29th. “But I haven’t felt my game had gotten that much worse.”

Certainly not at Harbour Town.

Donald’s round got started with a 25-footer for eagle on the par-5 second hold. He added four more on the next six holes. Donald then tied leader Nicholas Thompson with a birdie on the 14th before stretching his lead with a final one by rolling in a 15-foot putt on the par-3 17th.

Donald nearly closed with a flourish when his approach on the closing, lighthouse hole nearly landed in the cup on the fly before bouncing to the edge and settling for par.

Donald’s not the longest hitter on tour and said some layouts are dragons he can’t slay.

“But this one I feel like I can plot my way around with low wedges,” he said. “If you miss greens, you need to be pretty good at the short game. Certainly a course that favors my style of play.”

Matt Kuchar, ranked sixth in the world, shot 70 as part of a group of five golfers another shot back at 4 under.

Donald’s performance capped a long day at soggy Harbour Town, where 65 golfers had to finish the second round before the third could begin with K.J. Choi, Furyk and Ben Martin tied for the lead.

But by midafternoon, the moisture had softened things and competitors were treated to slick greens easily accepting approach shots.

At times, it looked more like a local club shootout than a PGA Tour stop.

Thompson, whose sister Lexi won her first LPGA Tour major at the Kraft Nabisco Championship earlier this month, got things going with five birdies on the front nine to lead at 7 under. But bogeys at the 16th and 18th holes dropped him back into the group at 208.

Schwartzel, the 2011 Masters champion, was among those with an early start and jumped into the chase with a third-round 68 to move to 5 under. He said the course held up well despite more than 2 1/2 inches of rain that fell here Friday.

Schwartzel has not won on the PGA Tour since his surprising run to the green jacket, when he birdied the final four holes.

“I think if I can continue the ball striking and giving myself chances, I can make a few (birdies) tomorrow and give it a shot,” he said.

Furyk, the 2010 winner at Harbour Town, made birdie on his second hole to take the lead at 6 under. He failed to build on that hot start, but held on to stay in the hunt.

The craziest day might have belonged to Kuchar, the highest-ranked player competing at Harbour Town after the season’s first major. He followed his fifth-place showing at the Masters last week with a strong bogey-free 66 on Thursday to take the lead.

Things went the other way quickly Friday, with Kuchar posting a pair of double bogeys before the rains came and suspended play. Kuchar struggled some more with a bogey on the eighth hole once he restarted Saturday. Then he made four birdies on his back nine to climb back in it.

Kuchar has finished fifth or better in his past three events and has a chance to do it again at Harbour Town.

“To be playing some good golf and be in contention is fun,” he said. “I’m excited to have my fourth shot at trying to take a title.”