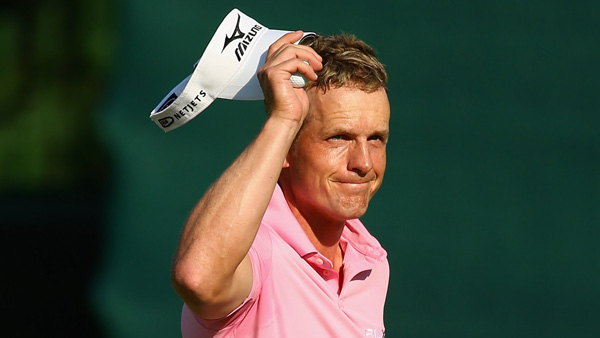 SUN CITY, South Africa — Luke Donald birdied to the last hole for a 3-under 69 Saturday to hold on to a one-shot lead after the third round of the Nedbank Golf Challenge.

Donald had been tied with Danny Willett on the leaderboard before his shot out of the rough and over some trees ended up within four feet of the pin on the last hole.

Donald moved to 13-under 203 overall to sit one shot ahead of Willett and three ahead of Ross Fisher, as Englishmen made up the top three at Sun City in the European Tour’s 2015 season-opener.

Willett surged into second after carding eight birdies and just one bogey for a 65. Fisher, the first round leader, is third after a 70.

The former top-ranked Donald didn’t match his blistering 63 on Friday, when he also had to deal with a charging baboon on the course, but is in position for his first title since late 2013 and his first on the European Tour for over two years.

“I really haven’t put myself in position very often in the last year,” Donald said. “So I’m excited to be in that position again. That’s why we work hard and that’s why we practice so much, and I’m excited for the challenge tomorrow.

While Donald has a good chance at his first Nedbank title, former Sun City champions and former No. 1s Martin Kaymer and Lee Westwood struggled.

They are both tied for 24th in the 30-man field at 4 over, with Westwood slipping to a 78 on Saturday at Gary Player Country Club, where he holds the course record with a 62 in 2011. Westwood’s chip in from the bunker on No. 14 for an eagle did little to make up for his five bogeys and a triple-bogey 7 on No. 17.

Donald slipped up at Nos. 13 and 17 for his first bogeys since the sixth hole of his opening round. But he rolled in his birdie putt on 18 after the brilliant approach got him out of trouble and ensured he was the outright leader going into Sunday.

Marcel Siem is fourth, five shots behind Fisher and eight off Donald’s lead, while South African Louis Oosthuizen pushed up into a tie for fifth to give the home fans something to shout about.

Brendon Todd is the highest-placed American, but is still only tied for 17th after a 3-over 75. The high point of Todd’s day was his tee shot on No. 16, which rolled over the edge of the cup and was less than an inch away from the first hole-in-one on No. 16 in the 33-year history of the tournament.