Diane Barabé recognized as Golf Canada’s Volunteer of the Year 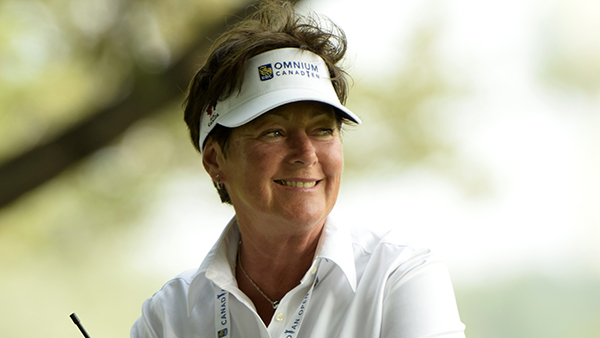 Golf Canada is pleased to announce that Granby, Que. native Diane Barabé has been named its 2015 Volunteer of the Year. She will receive the honour at the Saturday, Feburary 14 closing dinner of the 2015 Annual General Meeting.

The roles of rules official and golf committee member are not easy. It takes a dedicated and knowledgeable individual to serve the game and teach those willing to gain a better understanding of it. Diane Barabé is one such individual.

In 1992, Barabé’s love of the sport took her beyond the links. The long-time member of the Miner Golf Club joined its Board of Directors and became involved with the Eastern Townships District of the Canadian Ladies’ Golf Association (CLGA). The organization needed a rules official to guide and manage its tournaments; Diane Barabé became that person.

Following seven years of committed service, Barabé decided her insights into the game and her understanding of its inner-workings were required elsewhere. She recognized a need at the provincial level with positions open on the Executive Committee, the Standing Rules Committee and CLGA – Quebec Branch’s Board of Directors; Again, Diane Barabé rose to the occasion.

She helped ease the transition of the Quebec Golf Association and the CLGA – Quebec Branch amalgamating to become Golf Quebec in an effort to better serve its members, clubs and stakeholders. As a certified Level 4 rules official, she served as the Chairperson of Golf Quebec’s Rules Committee from 2008 to 2012. In 2014 when the provincial organization again needed her wealth of knowledge and experience, she returned to the committee as its co-Chairperson to serve once more as Head Rules Official for a number of provincial events and to appoint rules officials for championships across Quebec.

Diane Barabé has actively demonstrated her knowledge of the rules of golf on many occasions, even becoming the first woman from Quebec to referee the Canadian Men’s Open Championship at the 2014 RBC Canadian Open at the Royal Montreal Golf Club. Just as important is the role she plays in sharing that knowledge with others. She has instructed in Golf Canada’s Level 3 and Level 4 Rules Seminars to train Canada’s next generation of rules officials.

Now in its ninth year, Golf Canada’s Volunteer of the Year award is annually presented to individuals in the community who best exemplify the national sport organization’s commitment to growing the game. Throughout her time with the sport, Barabé has consistently and selflessly shown a willingness to help where she can and the uncanny ability to be where she is needed. It is for this passion, dedication and service that Golf Canada thanks her and recognizes her as its Volunteer of the Year.