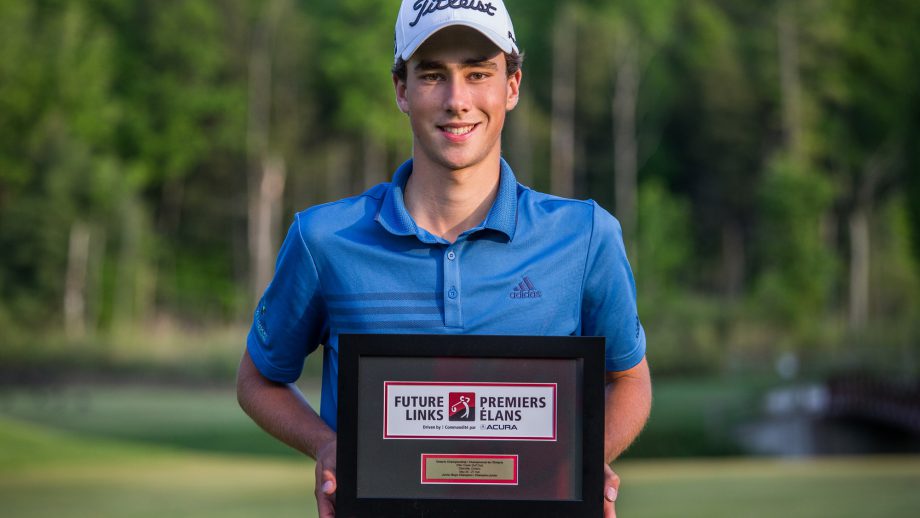 OTTERVILLE, Ont. – Laurent Desmarchais came from behind while Taylor Kehoe maintained her second round lead to earn medallist honours at the Future Links, driven by Acura Ontario Championship at Otter Creek Golf Club.

Desmarchais, who started the day in second, earned a hard-fought victory to end the tournament in first place.

“I made a few good putts and was 6-under through 14 holes,” said Desmarchais, who will also be competing at the Quebec edition in two weeks time. “It was very nice to earn this win after tough conditions and a tough course.”

The Longueuil, Que. native shot 2-over in round three to close out the tournament with a 3-under par total and a comfortable 3-stroke victory.

Cam Kellett topped the leaderboard going into the final round and started the day strong with birdies on holes 2 and 3, entering the back-nine only one-stroke behind Desmarchais.

However, back-to-back double bogeys on the 11th and 12th holes signalled trouble for the London, Ont. product. The 18-year-old finished the tournament in second place after shooting 6-over in the final round.

Dylan Henderson of Waterloo Ont. made an eagle on hole 4 to end the day in third after firing  a three-round total of  3-over, 216.

Rounding out the players in the top-6 spots are Bavake Sihota from Caledon, Ont. (+7), Logan Boucher of Beaconsfield, Que.(+7) and Robbie Latter of Mississauga, Ont.(+7).

Kehoe continued her strong showing in the girls division by carding a 2-over 74 to close out the tournament with a 5-over total of 217. The Strathroy, Ont. product struggled on the front-nine after recording five bogeys but finished the day strong, with 5 birdies across 18-holes.

“This win means a lot,” said the 14-year-old of her first time play at the tournament and subsequent medallist honours. “It was a very fun tournament and amazing opportunity.”

Team Canada Development squad member Monet Chun posted a 1-over 73 to finish the tournament in solo-second. The 17-year-old from Richmond Hill, Ont., who recently won the Future Links driven by Acura Pacific Championship, ended the tournament only 2-strokes behind the lead.

Alyssa DiMarcantonio, also of Team Canada, finished T9 after shooting a 4-over 76 in today’s round. The 15-year-old leaves the tournament tied for most eagles made with two eagles  –  one on hole 6 in round 2 and one on hole 15 in round three.