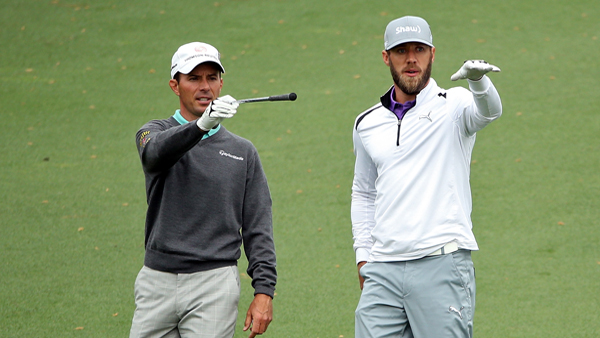 IRVING, Texas – Canadian Mike Weir hasn’t had a top-25 finish since 2010. After the second round of the Byron Nelson Championship Friday, he’s closer to breaking that drought.

Weir, of Brights Grove, Ont., and fellow Canadian Graham DeLaet of Weyburn, Sask., are part of an eight-player group tied at 6-under 134, two strokes behind leader Brendon Todd, heading into Saturday’s third round.

“The work I’ve been doing over the years is to get back into this position, and now I’ve got to see if I can handle it and get momentum going and play well on the weekend,” said the 44-year-old Weir. “It’s been difficult to play and not be in contention.”

Also at 6 under after Friday were Martin Kaymer _ five days after winning The Players Championship _ Paul Casey, who finished near the top of the leaderboard after a record back nine, Morgan Hoffmann, who had had bogey-free 66s, Tim Herron (66), Charles Howell III (66) and Marc Leishman (68).

Casey was over par Friday before matching the PGA Tour record for the best score on a back nine, an 8-under 27 with six birdies and an eagle. That was part of his 7-under 63 that was the low round of the day, though he could never remember such a good nine.

“On par-3 courses, I think,” Casey said. “I like to think I would be good at shooting low rounds of golf through the past, but certainly nothing like that.”

When Casey made the turn, he was coming off a three-putt at No. 9, his third bogey of the day. The 36-year-old Englishman, whose only PGA Tour victory was five years ago, was then 2 over for the tournament, even after making a 9-foot eagle putt on the par-5 seventh hole.

“I think it’s easier when your back is up against the wall, like I was today” Casey said. “I was backed into a corner and had to do something. A little shift in, let’s say, attitude, and a little shift in goals.”

Kaymer had his second consecutive 67, and has been in the 60s for all six of his rounds at TPC Four Seasons. The German won at TPC Sawgrass on Sunday.

“If you had a good week, obviously you can take a lot into the next week. You play a little bit more free, a little bit more relaxed,” Kaymer said. “It’s a new week, and I want to do as good as possible here.”

For the second time in five years, Todd is back on the PGA Tour after getting his card back through the Web.com Tour. He ended his round with back-to-back birdies to wrap up a round of 64 in which he needed only 22 putts. That included the 6-footer at the par-3 17th after his tee shot rolled just past the hole.

“It’s nice to put two under-par rounds together before the cut. That’s been a challenge for me this year,” Todd said. “I was patient today.”

Todd, who started with six consecutiveF pars before four birdies in a five-hole stretch, first got to 7 under with a 12-foot birdie at the par-3 13th hole, but gave that stroke back at the par-4 15th when he hit his first two shots into the rough and had his only bogey.

Peter Hanson was leading after a first-round 65, but was eight strokes worse Friday and dropped back to a tie for 25th at 2 under.

David Duval, only a stroke off the lead after an opening 66 that included birdies on four of his last five holes, shot a 76 Friday and missed the cut by a stroke at 2-over 142. The former No. 1 player, now 890th in the world 15 years later, had six bogeys over his last 11 holes and had only one birdie during his second round.

Casey made a 6 1/2-foot birdie putt at No. 10. His drive at the short par-4 11th was short of the greenside bunker, and from an awkward stance hit his approach over the pin onto the fringe before making a 24-foot birdie. He also had birdies at Nos. 13-15, a 32-foot putt for an eagle-3 at the 16th, and closed with another birdie.

The overall nine-hole scoring record is Corey Pavin’s 8-under 26 on the front nine in the first round of the 2006 U.S. Bank Championship in Milwaukee in 2006. Seven others have had 27s on nine holes, the last Nick Watney in the third round of the 2011 AT&T National.

Scottie Scheffler, a 17-year-old amateur from Dallas, shot a 68 with six birdies and four bogeys to make the cut at 1-under 139.

Jordan Spieth, now 20 and the eighth-ranked player in the world, made the Nelson cut at ages 16 and 17 when he too was a top-ranked junior player from Dallas playing on a sponsor exemption. Spieth was 3 under after a 67 Friday.

Defending Nelson champion Sang-Moon Bae missed the cut after rounds of 73 and 74.

Stephen Ames had quite an interesting Friday in Texas. The Calgary native spun one back from 58 yards out on the par five 16th hole for eagle, but was later disqualified for an incorrect scorecard.

Stephen Ames DQ’d from @hpbnc, signed for a 4 but made a 5 at the fifth hole. #PGATOUR