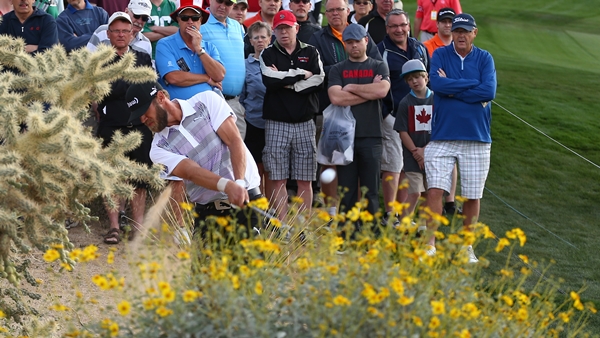 MARANA, Ariz. – Graeme McDowell pulled off the biggest stunner on a day of comebacks in the Match Play Championship.

McDowell won the last three holes against Gary Woodland to force extra holes, and then beat him with a 6-foot birdie on the 19th hole on Wednesday. It was a classic case of this fickle event providing hope even when it appears to be hopeless.

Jason Dufner also escaped against Scott Stallings. The PGA champion rallied from 3 down with five holes to play to beat Stallings with a par in 19 holes.

Patrick Reed defeated Canada’s Graham DeLaet 1-up. The Weyburn, Sask. native was 2-up thru 6 holes, but bogeys on No.’s 7, 12 and 17 proved to be too much of a hurdle to overcome.

After the loss he took to Twitter for some jovial banter.

“@DUSTYTROUT: @GrahamDeLaet cost me a #proline commmmme onnnnn you owe me $5 #thanks” It cost me a hell of a lot more than that…

– Harris English made his Match Play Championship debut with a 5-and-3 win over Lee Westwood.

– Billy Horschel made six birdies in 13 holes to beat Jamie Donaldson of Wales, 6 and 5, in the shortest match of the day.

– Rickie Fowler, coming off three straight missed cuts, caught Ian Poulter on a bad day and sent the Ryder Cup star packing with a 2-and-1 victory. “It feels like a big win after those missed cuts,” Fowler said. “It was nice to be the underdog. I had nothing to lose.”

– Bubba Watson was giving holes away early before winning three straight holes on the back nine in a 2-and-1 win over Mikko Ilonen of Finland.

– Henrik Stenson was in a battle with Kiradech Aphibarnrat of Thailand and won 2&1. Stenson avoided becoming the third straight No. 1 seed to lose in the opening round.