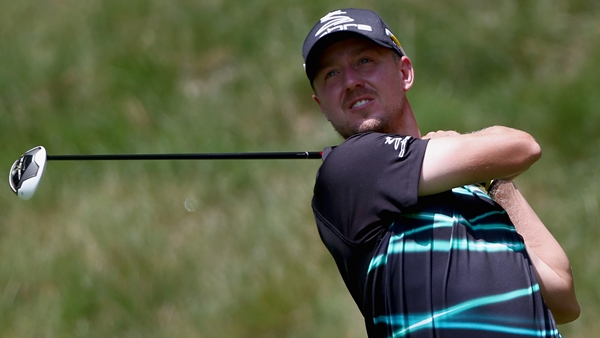 WHITE SULPHUR SPRINGS, W.Va. – Jonas Blixt’s memory of raising the trophy last year carried over to a strong start at the Greenbrier Classic.

The defending champion shot a 6-under 64 on Thursday to take a one-stroke lead over former Stanford star Patrick Rodgers and seven others at Old White TPC.

Blixt tied for second in the Masters but missed the cut in three of his last four starts. Returning to The Greenbrier resort brought him back to a comfort zone.

Starting on the 10th hole in the morning with little wind, Blixt had six birdies on his front nine and made the turn at 5 under. Six of the Swede’s eight birdies came on putts of 10 feet or less. He also chipped in from the rough for birdie on No. 16.

“The golf course is in perfect shape, like last year,” Blixt said. “You come back with a bunch of confidence knowing that you won here before.

“If I can get my putter to work the way it did today, I felt like I hit the ball on line every time, and it could be a really good week.”

Rodgers is looking to make his third straight cut since turning pro. He holed a 118-yard wedge for eagle on the par-4 first hole – his 10th hole of the day.

After the round, he was back on the driving range.

“Being a new pro out here, you’re always trying to figure out and establish your routines,” Rodgers said, “and mine is just kind of cool down after the round and working on the things I felt like I can improve, and hopefully be ready for tomorrow.”

Steve Stricker, who has wife Nicki carrying his bag this week, was among eight player at 66. Jimmy Johnson, his regular caddie, was already scheduled to carry Chris Kirk’s bag when Stricker became a late entry at The Greenbrier.

Stricker is playing only his eighth tour event this year. He’ll compete again next week at John Deere and is leaning against going to the British Open unless he has one or more high finishes before then.

Ryder Cup captain Tom Watson played alongside Keegan Bradley and Webb Simpson, getting a close-up view as he contemplates his three captain’s picks for the Sept. 26-28 event at Gleneagles in Scotland.

“The Ryder Cup’s a long way in the distance,” Watson said. “I’m watching other people as well. It’s fun to be out here to get to know the young players a little bit better.”

Watson took a similar approach in April, playing with Jordan Spieth at the RBC Heritage and Patrick Reed at Augusta National.

Watson has said he would use a wild-card pick on Tiger Woods if he’s healthy and playing well, leaving all sorts of possibilities with the other two picks.

The top nine get automatic berths on the U.S. squad. Reed, also in the Greenbrier field, is at No. 9, while Phil Mickelson, not playing this week, is 10th.

“You’d think that one round or two rounds wouldn’t determine us being on the team. That would be kind of silly,” Bradley said. “It doesn’t hurt to play well. Put it that way.”

Bubba Watson, the top-ranked player in the field at No. 3 in the world, had a 68. Only two rounds of 65 or better came during the afternoon when the wind picked up and the greens became more firm.

“I wish I could guess the wind differently, but otherwise it was a good day,” Watson said.

Stephen Ames was a shot back after a 69 and Brad Fritsch opened with a 70. Rounding out the Canadians was Mike Weir, who carded a 72.