Day wins The Barclays in another runaway 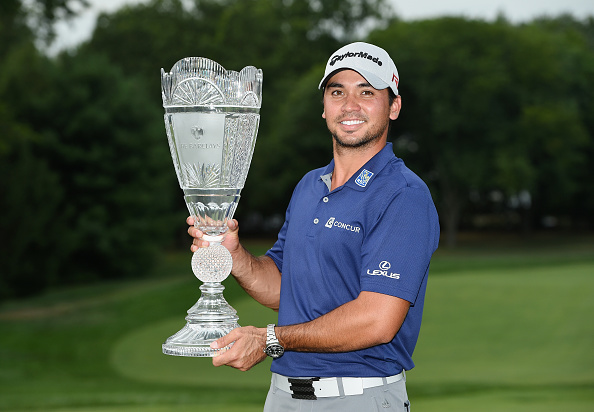 EDISON, N.J. – Jason Day, so poor as a kid that he shopped at a store where he stuffed as much used clothing as he could into a bag for $5, is trying not to think about the potential of a $10 million bonus for winning the FedEx Cup. That’s still four weeks away.

Day, so cocksure as a teenager that he talked about being No. 1 even before he was a PGA Tour rookie, is trying to keep his mind off the possibility that he could rise above Rory McIlroy and Jordan Spieth and claim the top spot in the world ranking. That could be as little as one week away.

His six-shot victory Sunday in The Barclays opened a whole world of possibilities.

“I can only control what I can control,” Day said.

And he has a great grip on that at the moment.

Fresh off his first major title at the PGA Championship, Day used that frightening blend of power and putting to bury another world-class field at The Barclays. He finished off a sensational weekend at Plainfield Country Club with an 8-under 62, the lowest closing round by a winner this year on the PGA Tour.

Henrik Stenson got within two shots after back-to-back birdies until he stalled with four holes to play, and Day made a pair of long putts across the green for birdies to stretch the lead and give him a peaceful walk up the 18th hole.

Relentless to the end, he hit driver to the edge of the green and made birdie to complete a 63-62 weekend.

McIlroy, who didn’t play in the opening FedEx Cup playoff event so he could give his ankle an extra week of rest, moved back to No. 1 when Spieth missed the cut at The Barclays. That figured to be a two-man battle for the next month, except that now it’s a three-man race.

Day could go to No. 1 with a victory at the Deutsche Bank Championship at the TPC Boston, which starts Friday.

And the 27-year-old Australian would figure to be the favorite, at least considering how the last month has gone.

Since leaving the U.S. Open with vertigo symptoms, Day has won three of his five tournaments and is 62-under par in 20 rounds. He was 17 under when he won the RBC Canadian Open by one shot over Bubba Watson. He set a major championship record to par when he won the PGA Championship at 20 under at Whistling Straits for a three-shot win over Spieth. And he finished at 19-under 261 to beat Stenson by six shots.

“Jason is full of confidence, just heating it up, making birdies,” said Stenson, who closed with a 66. “It would have taken something really special to challenge him today the way he’s playing at the moment.”

Watson, who birdied the 18th hole for a 69 to finish third, was standing on the 15th hole when he said he turned to caddie Ted Scott and told him, “I’m playing good the last few months, and Jason Day is playing a thousand times better.”

The victory, his fourth on the PGA Tour this year to tie him with Spieth, moved him to No. 1 in the FedEx Cup and assures that Day will be among the top five who have a clear shot at the $10 million bonus at the Tour Championship.

More compelling is another race to No. 1.

Day remains at No. 3 in the world, but now enters the picture with Spieth and McIlroy for golf supremacy. All three will have a mathematical chance to get to No. 1 at the TPC Boston next week.

“Right now I’m trying to focus on getting some rest and going into next week, trying to play that golf course, which I absolutely love,” Day said. “All positive stuff.”

The only battle was to be among the top 100 who advanced to the next playoff event.

PGA Tour rookie Zac Blair was among eight players who played their way into the top 100, and he did it in a big way. He closed with a 66 and tied for fourth, moving him from No. 106 to No. 35.

Camilo Villegas at No. 123 appeared to be playing his way out of another week when he made three straight bogeys early on the back nine. Facing elimination if he failed to make par on the 18th, he got up-and-down by making a par putt from just inside 10 feet.

“As bad as I putted today, I think I made the hardest putt today,” Villegas said.

The Barclays did not end well for Stewart Cink and Nick Taylor. Cink needed a par on the final hole to advance, pulled his tee shot left into high grass and missed a 15-foot par putt for a 72. He finished at No. 102 in the FedEx Cup. Taylor, the Canadian rookie who won early in the season last November, took a double bogey on the 14th hole and then missed a 7-foot birdie putt on the final hole that would have sent him to Boston.

David Hearn of Brantford, Ont., shot a final-round 2-under 68 to reach even-par for the tournament. Taylor from Abbotsford, B.C., finished 2-over for a share of 53rd place.