Day wins BMW Championship on cruise control, moves to No. 1 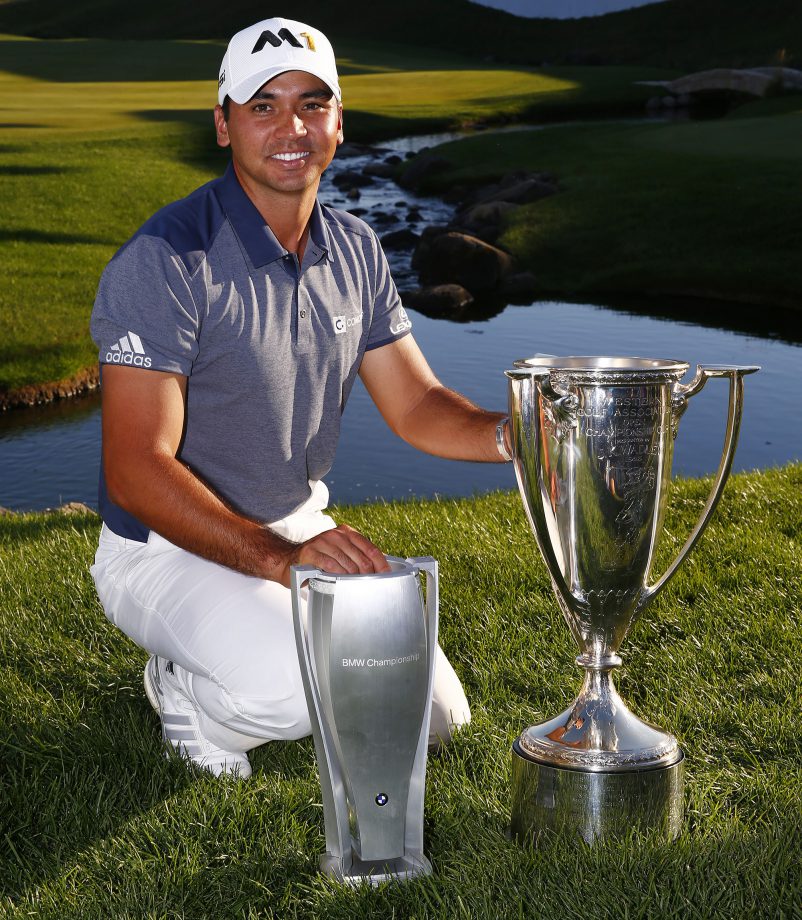 LAKE FOREST, Ill. – Jason Day has plenty of rivals at the moment, but very few peers.

Day’s runaway victory Sunday in the BMW Championship vaulted him to No. 1 in the world ranking, backing up a boast the then little-known Australian made during a conference call with reporters in 2007 – and for which he was roasted on more than one occasion since.

“I remember sitting on my mom’s bed and thinking that (predicting he’d be No. 1 someday) might not go over too well,” laughed Day, who turns 28 next month.

“I expected to get a little bit (of criticism), but not the response that I got from practically everyone,” Day recalled, another championship trophy poised within arm’s reach. “But it’s good to sit in this chair right now.”

His 2-under, final-round 69 and 22-under total at Conway Farms was good for a six-shot victory over rookie Daniel Berger. Scott Piercy finished third, seven strokes back.

The win was Day’s fifth on tour this season and his second in the FedEx Cup playoffs. In addition to leap-frogging Jordan Spieth and Rory McIlroy to claim the top spot in the world ranking, it made him the front-runner in the 30-man field heading to East Lake in Atlanta next weekend for the series finale.

“Whatever Jason Day is doing, or which course he’s playing, it’s ridiculous,” said Danny Lee, who’s at No. 19.

That was hardly an exaggeration here.

Day zoomed out to a big lead by shooting 61 and 63 in the first two rounds and was never seriously challenged. If he manages a win in Atlanta, it could make the race for Player of the Year – an award Spieth appeared to lock up by winning the Masters and U.S. Open earlier in the summer – closer than anyone would have anticipated just six weeks ago.

But Day has been on an incredible run since narrowly missing at the British Open. In his six starts since, he has won four times – the Canadian Open, the PGA Championship for his first major and the two FedEx Cup events – and played at a sizzling 101-under par clip.

“I think it might change some people’s minds about (player of the year) if I go ahead and win next week,” he said. “But we can’t deny what Jordan has done in the in the major championship this year. For a 22-year-old kid to accomplish what he’s done … that has been an amazing ride.

His fellow players aren’t so sure. When Rickie Fowler was asked to pick between the two, he replied, “I’m glad it’s not my decision” – forgetting that he’ll have to cast a ballot at season’s end.

But the battle for No. 1 wasn’t the only drama hanging over the tournament. The quest to make the 30-man field heading to East Lake produced its own share of winners and losers.

Berger will be the only rookie and Harris English, who missed earning a spot by a single shot each of the last two seasons, shoe-horned himself into the 30th spot with a birdie at the 18th.

On the downside, Daniel Summerhays finished 31st after dunking a tee shot at the par-3 11th, and Justin Thomas lost his chance to join Berger as the only other rookie in Atlanta when Dustin Johnson birdied the final two holes.

Day, on the other hand, will head to the finale more in control of his fate than he has been in a long time. He and Colin Swatton, who’s been his mentor and coach since age 12 and doubles as his caddie now, set out a plan years ago to have Day reach No. 1 in the world by age 22.

David Hearn of Brantford, Ont., carded a 7-under 64 to vault into a tie for 28th place.