Day, Spieth rolling in opposite directions at TPC Boston 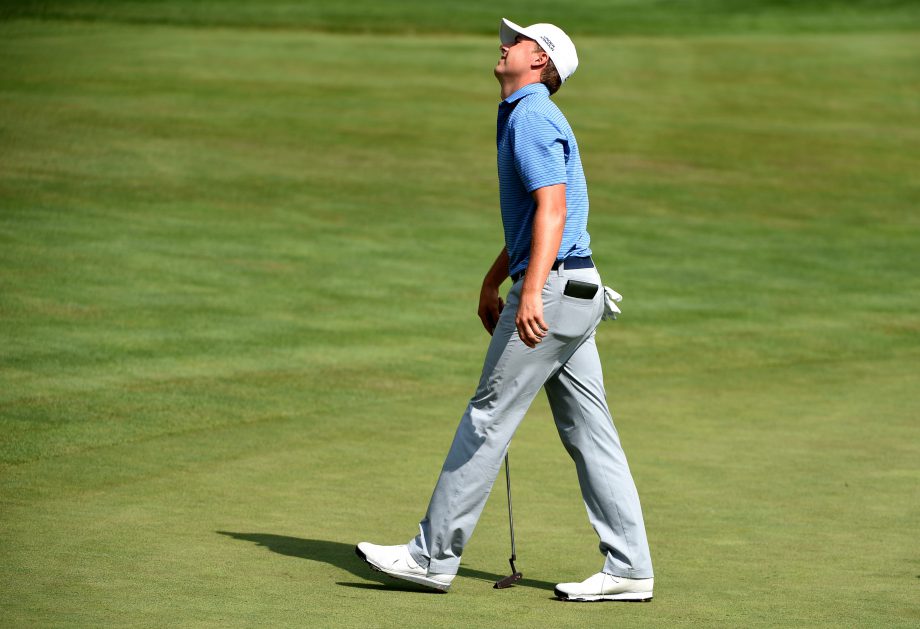 Jordan Spieth of the United States reacts after missing a putt on the nineth green during round one of the Deutsche Bank Championship at TPC Boston on September 4, 2015 in Norton, Massachusetts. (Ross Kinnaird/ Getty Images)

NORTON, Mass. –  Brendon de Jonge described his opening round Friday at the Deutsche Bank Championship as coming out of nowhere. Jordan Spieth’s start – his third straight round over par – was becoming far too familiar for him.

De Jonge ran off seven birdies in calming conditions at the TPC Boston for a 6-under 65 that gave him a two-shot lead over nine players, including Rickie Fowler, Henrik Stenson and Luke Donald.

“It’s been a tough stretch for me the last couple of months, unfortunately,” de Jonge said. “I felt like my game was OK, but the scoring wasn’t. And then, obviously, everything today sort of clicked.”

Jason Day, needing a victory to become No. 1 in the world for the first time, reached 5 under until two bogeys over his final five holes. He had a 68 and was right in the mix. Rory McIlroy, back at No. 1 and playing for only the second time since the U.S. Open because of an ankle injury, had a 70.

The shocker was Spieth.

He was visibly irritated just an hour into his round after two poor irons shots set up bogeys, and his day never got much better. The Masters and U.S. Open champion had eight bogeys in a round of 75, matching his highest start of the year. Coming off a missed cut at The Barclays, he goes into Friday in a tie for 80th. It was the first time since June 2014 that Spieth has had three straight rounds over par.

He left without speaking to reporters.

De Jonge played on the Presidents Cup team two years ago, though he doesn’t consider himself in the mix for the South Korea matches next month, unless he were to win. And that’s the one item – winning on the PGA Tour – that remains on his checklist.

This would be an ideal place. The second FedEx Cup playoff event assures the winner a spot in the top five at the season-ending Tour Championship and a clear shot at the $10 million bonus.

Of the players at 67, the most intriguing was Donald. A former world No. 1, he first had to make sure he got into the top 125 to qualify for the FedEx Cup playoffs, and then last week at The Barclays he had to play his way from No. 119 into the top 100 that got into the TPC Boston. Now at No. 87, the next goal for Donald is to crack the top 70 to get to the third playoff event north of Chicago at Conway Farms, his home course.

“First things first, I’ve got to get to Conway, which is obviously a place I’m very familiar with, my home course up in Chicago,” Donald said. “So keep playing some solid golf I’ll get there.”

Donald said it was tough to make birdies, and those are words rarely spoken on glorious days such as this one at the TPC Boston. A front came through that made temperatures pleasant, though the wind was strong at times in the morning and a few pins were on knobs.

Phil Mickelson, in dire need of a big week to bolster any chance of being picked for the Presidents Cup, had a pair of three-putt bogeys and shot 70.

“It was the most challenging I’ve seen this golf course play, especially given that the greens were very receptive,” Mickelson said. “But I played pretty good golf today. I hit a lot of good shots and I hit a few bad ones, but they weren’t too bad. And it was an OK start.”

Day looked like he might birdie them all after three holes. Ultimately, he knew that 68 was a decent start.

“I was making everything I looked at, and then it slowly dried up,” Day said. “It was a very patient day. You can’t get out there and be so disappointed. Once you’re frustrated you’re going to make some mental errors and it’s going to be bad for you.”