Day in the lead at PGA as Spieth makes a charge 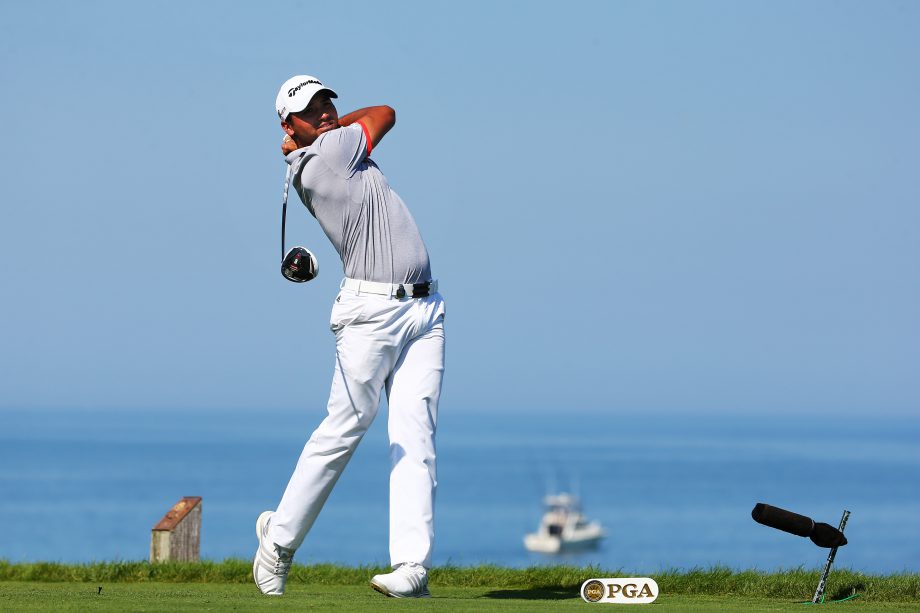 SHEBOYGAN, Wis. – With six straight 3s on his card, Jason Day looked determined as ever Saturday to finally get that first major. He had a 6-under 66 and built a two-shot lead in the PGA Championship, the third straight major he has at least a share of the lead going into the final round.

One look at the leaderboard at the name right behind him – Jordan Spieth – made it clear it won’t be easy.

Spieth was five shots behind and had two holes to play when he capped off a stunning charge along the back nine at Whistling Straits with six birdies over his last eight holes, including three in a row at the end that gave him a 7-under 65 to get into the final group.

“Very pleased to have a chance to win another major,” Spieth said.

He is trying to join Tiger Woods (2000) and Ben Hogan (1953) as the only players to win three majors in one year, and Spieth hopes to rely on his experience of having already won the Masters and U.S. Open this year.

Day showed plenty of moxie, though.

After making a double bogey that cut his lead to one shot, and then failing to birdie the par-5 16th, he poured in a 25-foot birdie putt and pumped both arms to show how much it meant.

“One more day left,” Day said before heading off to the practice range before the sun set on this wild day along Lake Michigan. “I got to keep pushing forward, keep grinding, keep doing the best I can out there and see how it goes tomorrow.”

Saturday featured abundant sunshine and endless action, starting in the dead calm of the morning when Matt Jones finished the storm-delayed second round with two birdies for a two-shot lead. In the hunt at a major for the first time, Jones kept his cool even when his drive landed in a hospitality tent left of the ninth fairway and he chose to play off the blue carpet, over the white fence and just off the green.

But he imploded at the end, dropping four shots over the last four holes for a 73.

Day looked like he was headed that direction. One moment it looked as though the 27-year-old Australian was pulling away. The next minute he was pulling himself together.

He played a six-hole stretch around the turn in 6 under, which included a 15-foot eagle at No. 11 for his first lead of the round. When he stuffed another approach close on the 14th hole for birdie, he was 16 under.

One swing changed everything.

He tugged a 5-iron into a bunker left of the 15th green and was surprised by the amount of sand. The first shot didn’t make it up the slope and rolled back into the sand, and Day wound up with a double bogey right about the time Spieth shifted into another gear.

Spieth was trying to stay close enough to have a chance on Sunday. The volunteers were slow to post Day’s double bogey on the large leaderboard on the 18th green, which Spieth couldn’t help but notice as he lined up his 7-foot putt.

“I saw Jason was at 16 under and I said, `You’ve got to be kidding me. When is he going to slow down?'” Spieth said. “I saw that he was 16 under with four holes to go, thinking he could get to 17 (under pretty easily). I need to make this to have a chance within four of the lead. And then I think he’s dropped a couple of shots since then. But I did all I could do to finish off the round.”

Day did his part, even after failing to make birdie on the par-5 16th. Instead of getting down, he hit 4-iron into 25 feet on the 17th hole and rolled in the birdie.

This was hardly a two-man race. Branden Grace of South Africa, tied for the lead with three holes to play in the U.S. Open when he hit a tee shot out-of-bounds onto the train tracks at Chambers Bay, holed a bunker shot for birdie on the 18th hole for a 64 to finish three shots behind.

“It’s another chance,” Grace said. “This is what we all play for. We all play to give ourselves the opportunity to get close to a major championship and we’re all here.”

Justin Rose also was three shots behind, even with a double bogey on the fourth hole for the second straight day. Rose also missed the 18th and made bogey, giving him one more shot he just make up against Day.

Still in the mix was Martin Kaymer, who had a 65 and was four shots behind. Kaymer won the PGA at Whistling Straits five years ago.

Day already has two wins this year and plenty of heartache in the majors. He was in a four-way tie for the lead at Chambers Bay while coping with vertigo symptoms, and he faded on the last day. A month ago, he needed birdie on the last hole at St. Andrews to get into a playoff at the British Open, and it stopped just short.

“It’s just all been trending in the right direction,” he said Saturday morning after finishing his second round.

Canadian Nick Taylor posted a third-round of 3-over par 75.