Dawson leads by a stroke on Champions Tour 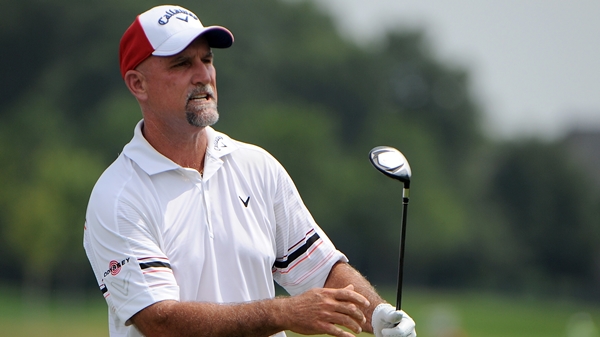 SAN ANTONIO – Marco Dawson birdied four of the first six holes Saturday and shot a 5-under 67 to take a one-stroke lead in the Champions Tour’s AT&T Championship, and Bernhard Langer moved closer to wrapping up the Charles Schwab Cup before the season-ending event next week.

Dawson also birdied two of the last four holes to reach 12-under 132 on TPC San Antonio’s AT&T Canyons Course. He won his only title in a PGA Tour-sanctioned event in 2002 in the Web.com Tour’s LaSalle Bank Open.

“I’m not going to lose any sleep, believe me,” Dawson said. “I used to be a perfectionist, but my attitude now is to play like I’m in the pro-am. Have fun. It’s not life or death out there.”

Langer, a five-time winner this season, was tied for eighth at 7 under after a 66. He has a 771-point lead over second-place Colin Montgomerie in the Schwab Cup and can take the title with a three-way tie for seventh or better.

“It would be nice to settle things while I’m here,” Langer said.

The top 30 on the money list after the tournament will advance to the season-ending Charles Schwab Cup Championship next week in Scottsdale, Arizona.

“I was 240 yards to the front of the green and 260 to the hole, and I hit a dead straight shot in there,” said Austin, who won his fourth PGA Tour title last year in the Sanderson Farms event in Mississippi. “It was the shot I was trying to hit. My putt was a double-breaker. I was just trying to get it close. I would have been happy with that, I admit.”