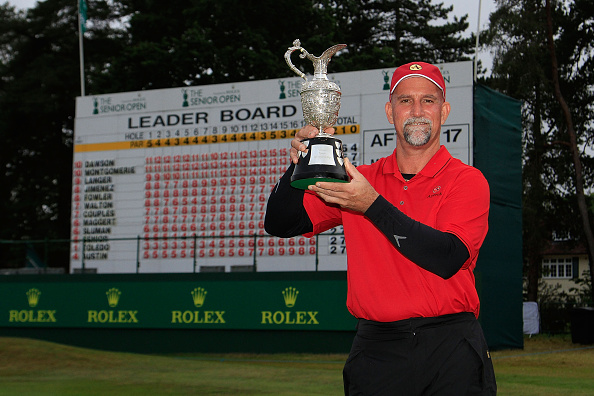 SUNNINGDALE, England – American Marco Dawson held off the twin challenge of super stars Bernhard Langer and Colin Montgomerie over the final nine holes to claim victory in a thrilling climax to the Senior British Open Championship on Sunday.

Dawson finished with a 16-under par total of 264 to claim his second title on the Senior Tour this year after more than 12 years without a victory.

“This is unbelievable,” said Florida-based Dawson, who played over 400 events on the PGA Tour without a win.

“Can’t tell you how many hours I’ve put in on the range. I’ve had two back surgeries to prove it and I know it has come later than most of the guys. But it came true.”

In a see-saw struggle, played out for the main part in intermittent rain and a fresh breeze, Dawson hit the front for the first time when he claimed his second eagle of the round at the long 14th, then sank a birdie putt from 25ft at the final hole to dash Langer’s hopes, the German being half that distance away with a chance to draw level.

The reigning champion holed his birdie putt to match Dawson’s closing 64, but it left him a shot shy of his sixth senior major.

“The three-wood I hit in the mist and rain at the 14th was probably one of the best I have ever hit and set up the eagle,” said Dawson.

“Marco played phenomenally,” said Langer. “Things went for him, he holed a bunker shot and had two eagles and leap-frogged both Monty and I. Then he made an amazing putt on 18 and I couldn’t tie him.”

Leading on ten under after completing the last nine holes of their third round in the morning, Montgomerie and Dawson and Langer, who was a stroke back, teed off in the afternoon for what turned out to be an epic contest.

All three parred the 15th, 16th and 17th, then when Dawson’s drive split the fairway at the final hole and he hit the green with his second and holed the putt, he clinched the title to add to his Tucson Open win back in March.

Among the rewards for Dawson is a place at Royal Troon in the Open Championship next year.

“Isn’t that nice. So I’ll be here for two weeks next year,” said Dawson. “It’s a lot of fun playing golf over here.”

Miguel Angel Jimenez finished alone in fourth place on 11-under 269 after a closing 67, bagging three birdies and an eagle at the long 14th when his second shot hit the pin and stopped just inches away.