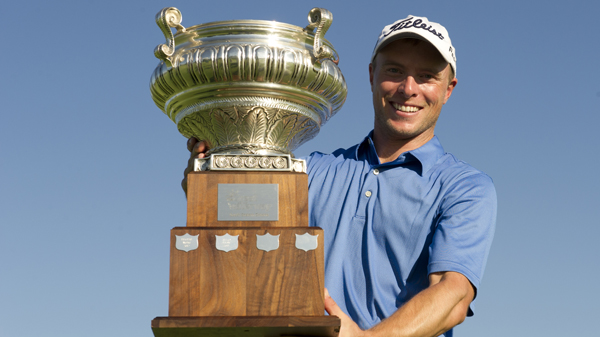 Bradshaw, a 31-year old Shepherd University graduate, fired a final round 5-under 67 to post 21-under total, securing the win with a two-putt from 25 feet for birdie at the last. Bradshaw won by a shot over Argentina’s Tommy Cocha and Jupiter, Florida’s Adam Long.

“It was a good day. I started out so hot, and then things kind of got a little muddy in the middle, but I closed the deal and a win’s a win,” said Bradshaw, who was the medalist by eight shots at the British Columbia Qualifying Tournament earlier this May.

Bradshaw began the day by finishing up the third round, which was suspended due to darkness on Saturday, with birdies on each of his final two holes to share the 54-hole lead with Kitchener, Ontario’s Chris Hemmerich. He then birdied five of his first seven holes of the final round to jump out in front at 21-under ahead of Long and Cocha, playing one group ahead of Bradshaw, Hemmerich and Burlington, Ontario’s Michael Gligic.

After Cocha and Long both made birdie at 18 to post the clubhouse lead at 20-under, Bradshaw split the fairway and found the green from 197 yards with a 6-iron, giving himself two putts for birdie and the win.

“In that situation, you’re going to hit the ball a lot further. I went with 6-iron and clubbed down and it worked out really well,” said Bradshaw of his final approach shot.

The win moves Bradshaw, who was making only his fourth start of the season, to ninth on the Order of Merit with three events to go in the 2014 season.

“It’s the biggest Tour that I’ve won on to date,” said Bradshaw, who owns seven West Virginia Open titles and has made four starts on the PGA TOUR and five starts on the Web.com Tour. “I kind of just took some time off golf, which I didn’t know how smart that was, and it turned out to be the greatest thing I’ve ever done. I had two months where I really struggled with my golf game. When I came here, I had played three times in the last three weeks, and for whatever reason it just clicked.”

Cocha and Long both recorded career best finishes on PGA TOUR Canada, while Gligic recorded his best finish since 2012 with a solo fourth place result. In a tie for fifth were Order of Merit No. 3 Brock Mackenzie, Brady Schnell, Michael Buttacavoli, Cory Renfrew and Hemmerich, who impressed in his professional debut.