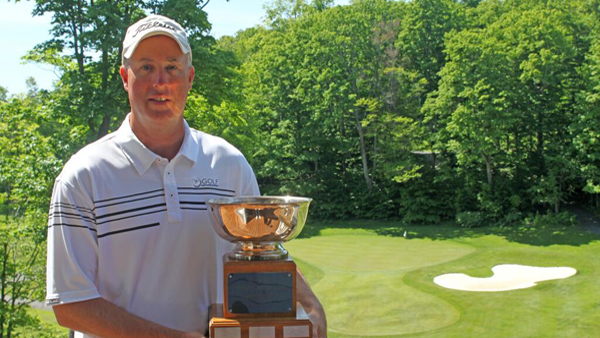 PORT CARLING, ON— Experience paid off for Dave Bunker as he won his third Golf Association of Ontario (GAO) Match Play Championship, June 3-6, at the Lake Joseph Club in Port Carling. The Woodbridge resident defeated Dundas’ Nicholas Ross 4&3 in the final round.

The 49-year-old Bunker was able to take a 3up lead after the front nine, but Ross, the Hamilton Golf and Country Club member, looked to cut the lead when he chipped in for birdie on the 10th hole. However, Bunker, the third seed in the tournament, also chipped in ending any momentum swings. The 19-year-old Ross would go on to take the 11th hole, but Bunker won the 13th and 14th holes giving him a 4up lead with four to go. Ross, the 20th seed, knew he had to win out to force a playoff and found the green on the par-three 15th, while Bunker’s shot landed in the rough. However, Bunker chipped to within a foot forcing Ross to sink his ten-foot putt to keep the match going. He pushed his putt just right and Bunker, the Brampton Golf Club member, won the match and the Championship.

“It’s fantastic!” said Bunker after the win. “I really played well this week, I hit the ball well, kept it out of trouble and it was a good, fun week.”

Bunker knew that one of the biggest moments in his win came with the double chip-in on the 10th hole. “Nick chipped in from the fringe and then I chipped in as well, both for birdies. That kind of kept me going. I did make a mistake on 11 and he won the hole, but it could have been two holes won by him.”

Getting to the final, let alone winning it, is no easy feat in a match play event. The field for the men began with 64 competitors. For Bunker, after winning his way through the first three rounds, he defeated Kingston’s Jesse Hogan in the quarter-finals and Toronto’s Turner Southey Gordon in the semis.

As for Ross, his road to the finals included a quarterfinal win over Mississauga’s Eric Flockhart and a semis victory against Woodstock resident Spencer Dunseith.

For Bunker, it is just another GAO championship to add to his collection. He is a former Ontario Amateur Champion, Ontario Mid-Amateur Champion, as well as a Canadian Mid-Am and Mid-Masters Champion.

Recently, he had the opportunity to represent the GAO at the Manuel Prado and Carlos Raffo Cups in Lima, Peru, something Bunker says helped him in preparation for this season. “I think I maybe got a head start because I was preparing for Peru and then had a week in sunny, warm weather, and played a course in great condition. That’s what a lot of people in Toronto couldn’t do. I’ve been working hard on things so I was happy that I was able to hit the ball well this week and that my short game was good too.”

Now, Bunker will turn his attention to the Investors Group Mid-Am June 20-23 at the nearby Taboo. Bunker says that there isn’t much preparation he is focusing on but that he did get a chance to go over and check out the course this week as he looks for yet another GAO title.

Established in 1986, The Ontario Men’s Match Play Championship is contested annually and features 64 of Ontario’s best amateur golfers that have qualified through one of six qualifying tournaments held earlier this season, or who have gained an exemption into the event.  Notable former champions include Ontario Golf Hall of Fame member Ian Leggatt, David Hearn and David Byrne.

The Golf Association of Ontario would like to thank Clublink and The Lake Joseph Club for their continued support of the Ontario Men’s Match Play championship.