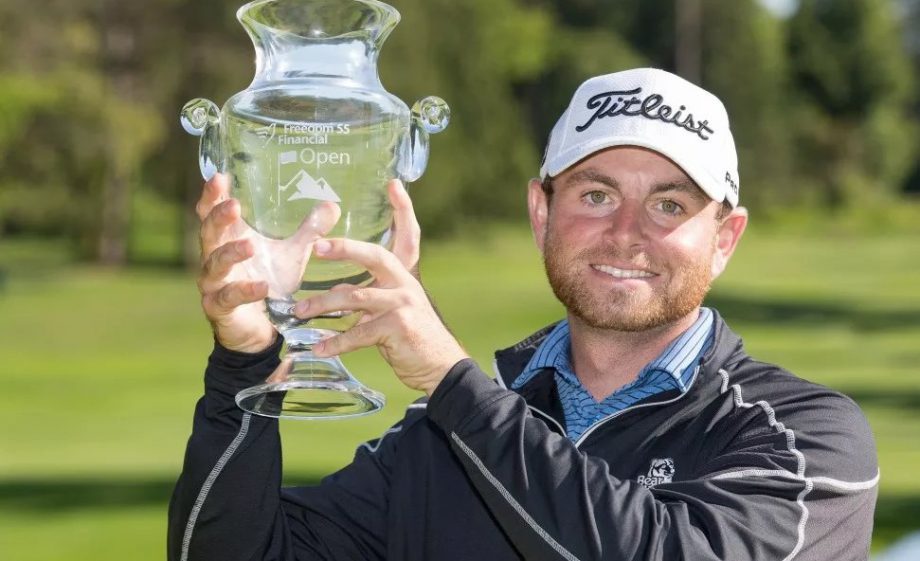 Vancouver – New York’s Dan McCarthy came up clutch with a birdie at the 72nd hole to win the Freedom 55 Financial Open on Sunday, giving him his first Mackenzie Tour – PGA TOUR Canada victory.

The 30-year old veteran in his fifth Mackenzie Tour season managed a tricky two-putt from more than 80 feet away at the par-5 18th hole for birdie to finish at 15-under for the week at Point Grey Golf and Country Club, one stroke ahead of Florida’s Tyler McCumber.

“I’m extremely happy with the way I played this week,” said McCarthy. “I guess I can attribute this to knowing myself better and what happens to me under pressure. I’ve been in the hunt enough times to learn how to close it out, and things went my way today.”

Finishing up the rain-delayed third round on Sunday morning, the 30-year old capped off round three with a birdie-eagle finish to share the 54-hole lead with McCumber.

McCarthy trailed McCumber by two through 10 holes, but drew even after McCumber, a two-time PGA TOUR Latinoamérica winner and the son of 10-time PGA TOUR winner Mark McCumber, bogeyed the par-4 16th.

Both players split the fairway at the reachable 18th, but while McCumber was unable to convert a greenside up-and-down for birdie, McCarthy left his approach below the hole and lagged an approach putt from the fringe to tap-in range.

“I couldn’t have left it in a better spot. I was caught between putting it and chipping it with a 7-iron, and I left it in a perfect spot there. I was very fortunate,” said McCarthy.

The win puts McCarthy in the No. 1 spot on the Order of Merit, in position to earn Web.com Tour status for 2017. The Le Moyne college graduate said the win gives him momentum in his quest to leverage a good season on the Mackenzie Tour into a promotion for next year.

“This is a huge confidence builder for me going forward,” said McCarthy. “I’d love to finish number one and be exempt out there, but the goal is to stay in the top five or even the top 10 and advance to the next level.”

McCumber, who has conditional status on the Web.com Tour after finishing 90th on the Money List last year and was in the field through a category for Web.com Tour members, said the second-place finish represents a stepping stone as he looks to get back up to the next level again.

“It’s definitely not the result that I was looking for, but I did everything that I could and I’ll try to look back and see where I could have saved a few shots,” said McCumber.

Two shots behind the winning score in a tie for third were Atlanta’s Wade Binfield and Oklahoma’s Talor Gooch.

Surrey, B.C.’s Ryan Williams finished at 10-under and was 7th, while former Golf Canada National Amateur team member Austin Connelly finished T8 at 8-under in his debut as a Mackenzie Tour member.