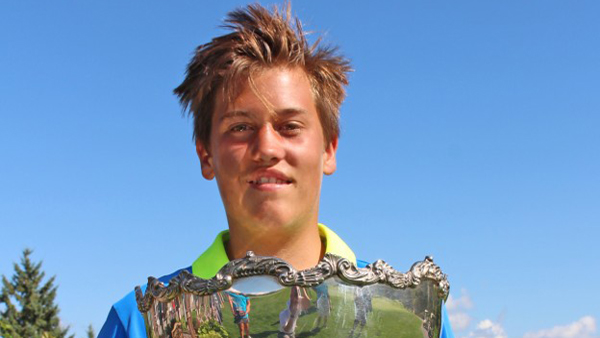 ASHTON, ON— Tecumseh’s Curtis Hughes entered the final round of the Golf Association of Ontario’s (GAO) Bantam (U15) Boys’ Championship, Aug. 7 at the Canadian Golf & Country Club in Ashton, seven shots off the lead. However, thanks to the round of the tournament, Hughes was able to jump up the leaderboard and claim the title.

After his first round, the 14-year-old was seven-over, but he came back during the second round with an amazing four-under (68) to win by a four-shot margin.

“My dad, who is the head pro and director at Rochester Place Golf Course, and I took a few hours after my round yesterday just to think and process what I would needed to do to win today. I wanted to make six birdies to begin the round and to get back to even, but that didn’t happen. Still, I made a few birdies out there and was able to win,” said Hughes

The Beach Grove Golf & Country Club member began the round with birdies on the second and fourth holes. He did bogey six, but that would be the only blemish on his round. He went on to birdie the 10th, 12th and 13th holes for the win.

“I haven’t played in many event’s this year,” added Hughes. “But it was a lot of fun. I really love playing in tournaments. This is definitely the number one result in my golf career so far.”

Finishing second was Richmond Hill’s Eric Byun. Byun entered the day one off the lead at one-over for the tournament. He would finish the round six-over (78) to bring his tournament total to seven-over.

Brampton’s Jacob Presutti finished third with a second round of seven-over (79) to finish the tournament at nine-over. Rounding out the top five were Whitby’s Brendan Dunphy at 10-over, and Brampton’s Max Wang at 11-over.

For the final leaderboard and results of all 57 players see the tournament site here.