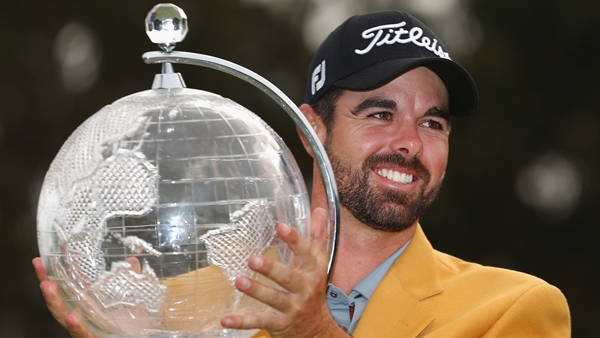 MELBOURNE, Australia – Australian lefthander Nick Cullen shot a 3-under 69 Sunday to win the Australian Masters by one stroke over Adam Scott, ending Scott’s attempt for a third consecutive victory in the tournament.

Cullen, who had a four-round total of 9-under 279, saved par on the 18th after hitting his bunker shot to a foot.

“It would have been nice to have a little buffer coming down here (the 18th), but a couple of three putts gave that away,” Cullen said. “To get up and down like that and have a win it’s an amazing feeling.”

Scott, who trailed by four strokes after three rounds, shot 68 Sunday and finished tied for second with two other Australians.

Scott’s 60-foot putt for birdie on the 18th hole curled out and he held the clubhouse lead for about an hour until Cullen finished his round at Metropolitan Golf Club.

“We had a great read on the final putt, and I couldn’t believe it didn’t go in,” Scott said. “After all the putts that didn’t drop this week, I really needed that one.”

An eagle at the par-5 fourth and back-to-back birdies at 11 and 12 helped Cullen clinch the win.

James Nitties and Josh Younger were tied for second with Scott.

Ranked 539th, Cullen’s previous biggest win was the 2012 Indonesian Open on the OneAsia tour, while he won the Queensland Open in 2013.

He led on the opening day of the Australian Masters last year, but finished fourth behind Scott at Royal Melbourne.

Second-ranked Scott now heads to Sydney for an Australian Open showdown with world No. 1 Rory McIlroy, the defending champion.